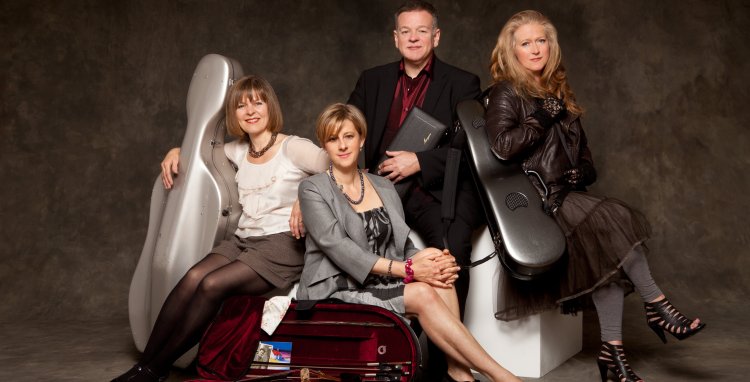 The above slightly updates what appears in the Season Brochure.

World famous oboist, Nicholas Daniel, founded the Britten Oboe Quartet with his colleagues and co-principals of the award-winning Britten Sinfonia. They bring together the highest musical standards through the experience of playing together for many years.

Moeran was brought up in Norfolk and a number of local folk tunes are included in his Phantasy Quartet from 1946, written for Leon Goosens, which starts this diverse programme. The pieces by Rodney Bennett and Knussen exploit the versatility of the oboe and date from the 1970s, as does the cor anglais quartet by Françaix, embued with his sense of fun. Mozart’s Oboe Quartet, written for the virtuoso Friedrich Ramm, a concerto without an orchestra, will round off the evening in a cheerful mood. 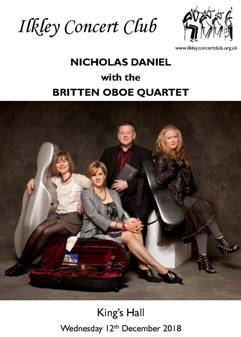 The combination of the oboe with a string trio was a creation of Mozart’s genius and so it was fitting that the Britten Oboe Quartet ended their visit to Ilkley with a sparkling performance of his Oboe Quartet, K370. This accented the close interplay between the members of the group and showcased the sensitive and virtuosic oboe playing of Nicholas Daniel.

Daniel also provided exemplary and enlightening introductions to the music. The adventurous programme had begun with Moeran’s Phantasy Quartet, a rhapsodic evocation of the Norfolk Broads. There followed more watery music in Richard Rodney Bennett’s Arethusa in which the eponymous nymph (the oboe) was pursued, and finally enfolded, by the waters of the river god (the cello). The first half concluded with Jean Françaix’s joyous Quartet, this time featuring the mellow tones of the cor anglais: highlights were a melancholy Andante, a syncopated scherzo, and finally an Allegro, a jolly race to the finish!

After the interval, the strings played an arrangement of four pieces from Bach’s Goldberg variations. This complete contrast allowed us better to hear the skilful playing and musical individuality of Jacqueline Shave (violin), Clare Finnimore (viola) and Caroline Dearnley (cello). A brief and entertaining duet, Sundew by Judith Weir, followed in which the violin and cello played out the fruitless tussle between the plant and the insect it was bent on capturing. The remaining piece, Cantata by Oliver Knussen, lacked the clear programme which had helped with the enjoyment of Arethusa and Sundew. Although played with great skill and intensity by Nicholas Daniel and the trio, it remained, at least for your critic, musically the densest and most difficult to approach.

So it was with added gratitude that the Concert Club audience listened spellbound to the performance of the Mozart Quartet which closed this evening of first-class music making. The generous applause which followed was rewarded with an exquisite encore in the form of Colin Matthew’s arrangement of Mondnacht by Schumann. A satisfying finish to a splendid concert!

Rodney Bennett: I can find no current commercial recording of this work.

Françaix,Knussen & Mozart: An excellent recording, made in 2016 by the Britten Oboe Quartet, includes these three works. The CD is full price from
Harmonia Mundi (HMM 907672), and also includes Britten’s Phantasy op 2 Oboe Quartet.

J.S. Bach: The Goldberg Variations were written for a keyboard instrument, and are usually recorded on a Harpsichord or Piano. However, arrangements
for various instruments, and combinations of instruments, have appeared over the years, and Brilliant Classics, at a super budget price, demonstrates some
of these. The 4 disc set (94621) includes performances for Harpsichord, Piano, Organ and, like tonight’s performance, Sitkovetsky’s arrangement for String
Trio, whilst a single disc (95591) has an arrangement for Recorder Quintet by the group ‘Seldom Sene’. The organ CD has a particularly beautiful sound, and
all five discs are available for around the price of one full price CD.