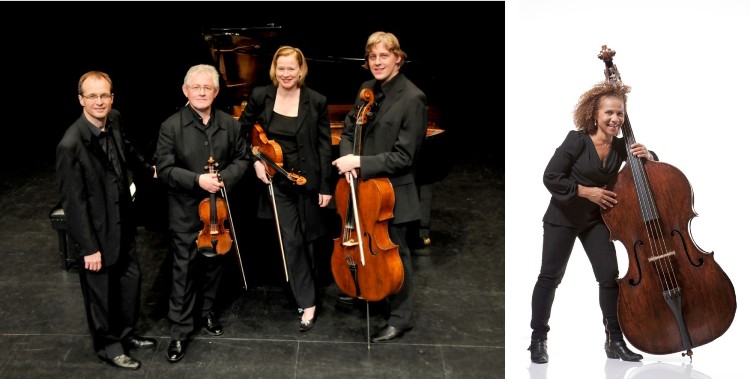 The popular Frith Piano Quartet returns to Ilkley, this time with double bass player Chi-chi Nwanoku, with a performance of Schubert’s Trout Quintet to open the season. The quartet was formed by pianist Ben Frith in 2001 with violinist David Heard, violist Louise Williams and cellist Richard Jenkinson. They quickly made a name for themselves as the most exciting British piano quartet. Chi-chi Nwanoku has become one of Britain’s most sought-after double bass players, developing a worldwide reputation as one of the finest exponents of the instrument.

The programme also contains Beethoven’s early piano quartet arrangement of his quintet for piano and winds, modelled on Mozart’s quintet K 452. This is followed by a masterly quintet by Mozart’s only full-time pupil, Hummel, whose reputation as a pianist and composer ran a close second to Beethoven. 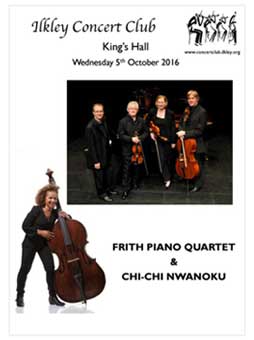 The Concert Club audience gave a justly warm welcome to the members of the Frith Piano Quartet, joined by leading double-bassist Chi-chi Nwanoku, as they launched the Club’s 71st season with an outstanding display of the best in chamber music playing. The Frith are understandably proponents of the piano quartet repertoire but for this concert every work – even that for four players – was a quintet!

The programme commenced with Beethoven’s Piano Quartet in E Flat major, an early work which shares his op 16 with a quintet version of the same work for piano and winds, inspired by an earlier work by Mozart. Immediately we knew we were in safe hands! The ensemble of these players is formidable and can only come from a thorough knowledge of each other’s musical personalities. No one player needed to push their tone to get their voice across and the warmth of their unison playing was a joy to listen to. Nevertheless, in the Andante of the Beethoven, each of the string players was able to put their solos across without dominating.

The quartet was enriched by the lively personality and the appropriately restrained playing of Chi-chi Nwanoku’s bass in the Piano Quintets of Hummel and Schubert which followed. The Hummel is a genial piece and here received a winning performance with genuine warmth in the slow movements and lovely light playing, particularly in the finale.

Hummel and Schubert were of course both accomplished pianists and it is not surprising that the piano plays a major part in these works, especially in the ‘Trout’ Quintet which rounded off the evening. However the beautifully articulate playing of Ben Frith never threatened to overwhelm the string texture while he was still able to give appropriate prominence to Schubert’s beautiful melodies and the bright upper registers of the King’s Hall piano.

The fourth movement variations, the memorable core of this work, received a wonderful performance and the concert was rounded off with a vigorous and playful account of the final Allegro which sent the listeners home more than happy.

An excellent Hyperion disc, CDA67745 (full price), includes the Piano Quartet and Beethoven’s reworking of the c minor Piano Trio, the String Quintet Op.104. Also included is the charming “Eyeglass Duo” for Viola and Cello. The recording quality is up to Hyperion’s usual high standard.

Both works are included on another Hyperion CD, Helios CDH55427 (budget price). The Schubert Ensemble of London is outstanding, and is very well recorded. An interesting alternative for the Hummel, on period instruments, is on a very cheap Brilliant Classics disc, which includes Piano Quintets by Dussek and Onslow. The excellent performances are by the Nepomuk Fortepiano Quintet.

The reliable label Naxos has a lovely performance of the “Trout Quintet” on 8.550658 (budget price). Jenó Jandó (piano) and the Kodaly Quartet also perform Schubert’s Adagio and Grand Concertante on this well recorded CD.
Raymond Waud