THIS CONCERT HAS NOW ENDED 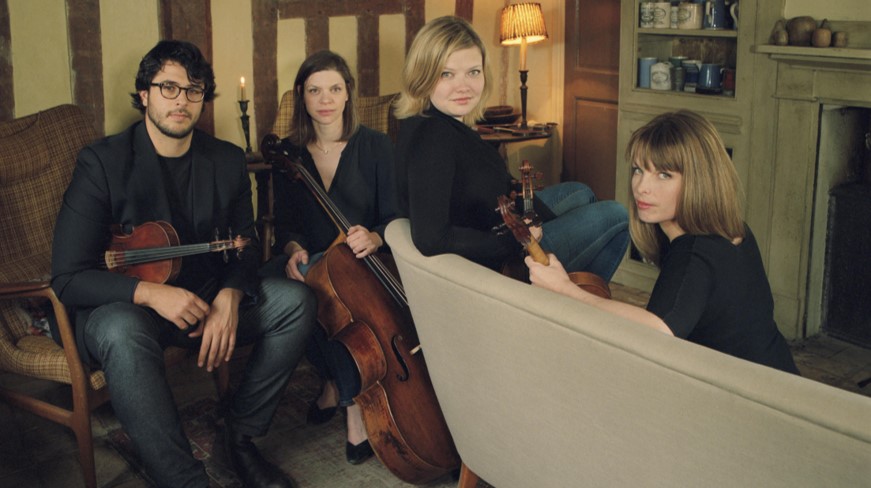 We are investing in these recordings as a means of continuing to support artists through these challenging financial times. If you wish to add your support please donate (say £5 per person viewing), via either of the donation buttons below – a new window will open.

In 2017 I heard the Chiaroscuro Quartet play live at the York Early Music Centre (also the venue for recording our on-line concert).  They played all six of Haydn’s Op. 76 quartets.  I thought I knew all these intimately—but their performance on period instruments was a revelation.  We are fortunate today to hear Mozart’s last three String Quartets played by the Chiaroscuros with their unique style.

The ‘Prussian Quartets’ were completed between 1789 and 1790 along with many other works including the Clarinet Quintet and Cosi fan Tutte.  Clearly overworked, Mozart was in very poor health and desperate for money.  Lacking the payment from the King, he was forced to sell the three Quartets to a publisher in 1790 ‘for a mockery of a fee’. They were published a few weeks after Mozart’s death in 1791, with the dedication to the King!

Despite the chaos in Mozart’s life at the time, the apparently effortless skill that he honed in a few years resulted in the ‘Prussian Quartets’.  They are exuberant, inventive and polished, have prominent cello parts, all four instruments contributing strongly, with exquisite and graceful melodies and the familiar magic of Mozart’s harmonic invention.

Each quartet has four similarly arranged movements: First movement – fairly fast, Second – slowish, Third – minuet and trio with conventional repeats and Fourth – a fastish, bright finale.  I particularly want to draw your attention to 5 DO NOT MISS movements. The first movements of K575 and K590 both start with a simple ‘do mi so’ phrase, but his inventiveness turns them into clearly different first movements.   The exciting minuet and trio of K589 is one of his most original.  Please keep your hat on for the roller coaster of the thrilling final movement of K590, his last string quartet.

I have long wondered (it seems others have too) why they are not played as frequently as Mozart’s famous six ‘Haydn Quartets’.  There is a clue in the dedication that Mozart sent to Haydn, dated 1 Sept 1785.   I summarise the main point including some of the Mozart’s text in italics.  ‘To my dear friend Haydn’, I know that you are the inventor of the modern string quartet, but just take a look at how innovative are the six quartets that I have dedicated to you. ‘They are . . . the fruit of long and arduous labour.’  In a famous letter to Mozart’s father, Haydn strongly approved of the young Mozart’s achievement – they were first played by Mozart, Haydn and friends.   The reason seems clear to me – the ‘Prussian Quartets’ are like a perfect jewel made with hope of payment from a pleased Patron.  In contrast the Mozart’s ‘Haydn Quartets’ were a challenge to the master. Evidently no effort was too much for the task of impressing his friend Haydn—and it shows.  Just compare them with Haydn’s 35th quartet (Op. 42) published around the time that Haydn received the quartets from Mozart.  But Haydn lived 18 years after the death of Mozart, having completed a total of 67 quartets—most of the ones written after 1795 are acknowledged masterpieces.

The string quartet Chiaroscuro has an international reputation for authentic performance of Classical and early Romantic repertoire on gut strings with historical bows. Chiaroscuro’s unique sound, described in the Observer as ‘a shock to the ears of the best kind’, is highly acclaimed by audiences all over Europe. Formed 16 years ago the group comprises renowned musicians from across the continent: Russian violinist, Alina Ibragimova; Spanish violinist, Pablo Hernán Benedi; Swedish violist, Emilie Hörnlund and French cellist Claire Thirion.

In 2013 Chiaroscuro was a prize-winner of the German Förderpreis Deutschlandfunk/Musikfest Bremen and received Germany’s most prestigious CD award in 2015 for their recording of Mozart’s Quartet in D minor K421 and Mendelssohn’s Second String Quartet in A Minor, Op.13.  Their growing discography includes recordings of music by Mozart, Beethoven, Schubert, Mendelssohn and Haydn. Recently released are the three Prussia Quartets which you are about to hear.

Prior to the first ‘lockdown’ the quartet’s engagements included their enthusiastically received debut concerts at the Vienna Konzerthaus and Philharmonie Warsaw, their first US tour and a return visit to Japan. They have appeared at numerous festivals and prestigious venues such as the Edinburgh International Festival; the Concertgebouw, Amsterdam; the Auditorio Nacional de Música, Madrid; the Auditorium du Louvre, Paris; the Snape Maltings and are frequent performers at Wigmore Hall, London.

Asked how they have coped with the restrictions of the last year, Chiaroscuro sent us the following information:

Obviously this year has been extremely challenging on so many levels and being a string quartet based in four different countries definitely hasn’t helped our logistical hurdles! During the first lockdown last year, we were forced to take a quartet sabbatical for 6 months. Trying to plan where to meet later in the summer was rather tricky too but we decided to go to Italy which didn’t have any quarantine rules at the time. We rehearsed intensively, all day long for five days but also had time to cook lots of lovely food!

In the Autumn there was a hopeful period where things started happening again and we were able to perform a few concerts in Potsdam, Berlin and London which were either with a very small audience or for broadcast only. In November we recorded the Mozart Prussian string quartets in Snape Maltings and it was great feeling to have accomplished it in spite of what were at times seemingly small odds.

Throughout this period we’ve had quite a lot of zoom meetings, not only to discuss ever changing concert plans but trying to check in on each other. It’s important to remind ourselves and each other that soon we will be able to perform to a live audience again and that will be such a buzz!

Alina Ibragimova has established herself as one of the most accomplished and intriguing violinists of her generation, performing music from the Baroque era to new commissions on both modern and period instruments. After beginning her studies in Moscow she moved to the UK with her family in 1996. She continued her studies at the Yehudi Menuhin School and the Royal College of Music. Her teachers have included Natasha Boyarsky, Gordon Nikolitch and Christian Tetzlaff.

Alina has performed chamber music here and abroad. (You will remember that she gave a memorable recital for Ilkley Concert Club with Cédric Tiberghien in April 2018). Alina has appeared as a concerto soloist with the LSO, AAM, OAE, all the BBC orchestras and many others in Europe. In 2015 she was a prominent presence at the BBC Proms as concerto soloist, performing with a Baroque ensemble and in two late night recitals to capacity audiences featuring the complete Partitas and Sonatas of Bach.

Pablo Hernán Benedi was born in Madrid, and after studying at the Padre Antonio Soler Conservatory of San Lorenzo de El Escorial he moved to London in 2009 to continue his studies at the Guildhall School of Music and Drama.

Pablo is a founding member of Trio Isimsiz. This award winning group won First Prize and the Audience Prize at the Trondheim International Chamber Music Competition and Second Prize in the Haydn Vienna Competition.

As a soloist Pablo has performed with the Philharmonia, London Chamber Players and Concerto Budapest amongst others. He works regularly as a section leader with Arcangelo, Concerto Budapest, Chamber Orchestra of Europe and the Swedish Radio Orchestra.

Emilie Hörnlund was born in Goteborg, Sweden. She studied at the Falun Music Conservatory, Guildhall School of Music and the Royal College of Music. She also studied baroque viola with Annette Isserlis. In 2006, Emilie became the first viola player to reach the finals of the Swedish Soloists Competition, the Ljunggrenska Tavlingen.

Claire Thirion was born in France and studied at the conservatoires in Marseille and Boulogne-Billancourt, then at the Paris Conservatoire before entering the Royal College of Music to study with Jérȏme Pernoo and Catherine Rimer (Baroque cello). In 2006 she was awarded the prestigious Tagore Gold Medal.

Claire performs across Europe as a soloist and chamber musician. She is in great demand as a performer of both modern and Baroque works. In 2008-10 she held the position of principal continuo player with Emmanuelle Haïm’s ensemble, Le Concert d’Astrée. She works regularly with LSO, OAE the BBC National Orchestra of Wales and is frequently invited as guest leader on period instruments with various ensembles here and abroad.

Some of the best Mozart Quartet playing that I have heard on recordings comes from the Alexander String Quartet. The last 4 Quartets are on the Foghorn label-SCL 2016 (2 CDs at full price). The Chilingirian String Quartet provide an excellent alternative of the same Quartets on CRD 3427 and CRD 3428 (2 CDs at medium price).