This online podcast has now finished 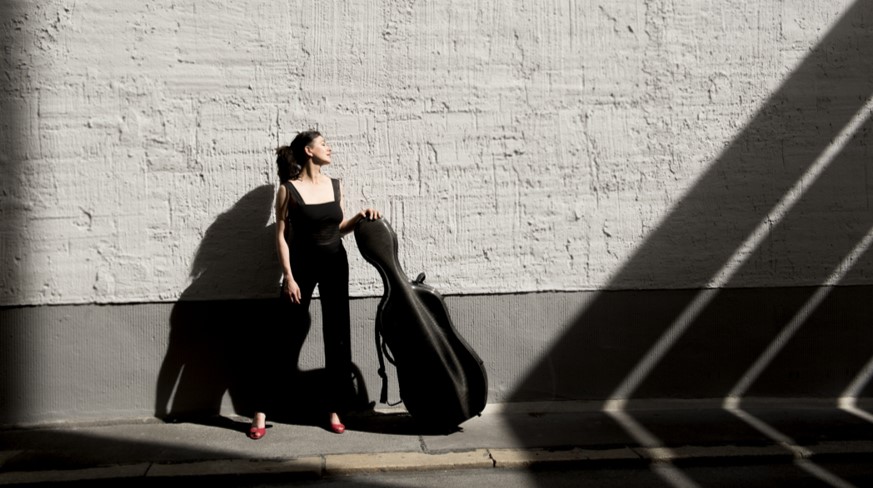 Schubert Sonata in A minor for arpeggione and piano, D821
a
Shostakovich Cello Sonata in D minor, op 40 (Starts at 26 mins)
a
We hope you enjoy this podcast which Natalie and Cédric recorded specifically for Ilkley Concert Club members from Berlin, Germany.

A member has suggested, that given the difficult times still being experienced by many musicians, they would like to donate £5 per online concert to Help Musicians (previously the Musicians Benevolent Fund).  If any other member would similarly like to make a donation, please click the Help Musicians picture to access our donation page.

The arpeggione was a hybrid cello-sized instrument similar to a viol or viola da gamba, a six-stringed cross between a cello and guitar. Invented in 1823 by two Viennese luthiers, Johann Georg Stauffer and Peter Teufelsdorfer (who called it the guitare d’amour), it was quickly discarded as passé, surviving only by virtue of this sonata which was commissioned by Schubert’s friend and one of the few exponents of the arpeggione, Vincenz Schuster, in 1824 (the same year in which Schubert completed the Death and the Maiden string quartet). Today, the sonata is played with either ‘cello or viola and piano and remains popular with audiences and players, despite the problems attached to transcribing a work for a six-stringed instrument to one with four strings and a smaller compass.

Although filled with the composer’s seemingly effortless melodies, dramatic mood changes occur in all three movements. It is tempting to consider these indicative of Schubert’s depressive state of mind at this time. In May 1824, he wrote to a friend ‘… I feel myself to be the most unhappy and wretched creature in the world … whose health will never be right again … whose most brilliant hopes have come to nothing…’

Shostakovich began writing his first Cello Sonata in August 1934, completing it within a month, just before his 34th birthday. The career of the young composer was reaching great heights; in January that year, his opera, Lady Macbeth of the Mtensk District, had received a rapturous premier and productions were being planned for Buenos Aires, Zurich and New York. The Sonata’s broad lyricism and untroubled mood (it is perhaps one of the composer’s most approachable works) may reflect this newfound confidence and success. However, the creative wellspring of this unusually genial piece (only the Allegro finale displays any of Shostakovich’s hallmark sardonic wit) may have been located elsewhere: cherchez la femme. Shostakovich and Nina Varsar had married in 1932 but in the spring of 1934, the composer fell in love with Yelena Konstaninovskaya, a translator fourteen years his junior. She can have been left in little doubt of the depth of his infatuation: ‘There is nothing in you which fails to send a jolt of ecstasy and fiercest passion within me when I think of you’, he wrote, ‘Lyalya, I love you as nobody ever loved before. My love, my treasure, my dearest, I lay my love before you!’ Thereafter, Dmitri’s love life developed at a breath-taking pace. By late autumn 1934, he and Nina had divorced. By January 1935, Nina was expecting their first child and the affair with Yelena was history. Within weeks, Nina and Shostakovich had remarried (they would stay together until her death in 1954) and Yelena was in prison, the victim, like so many in those fearful times, of an anonymous denunciation. Soon after, in January 1936, a shadow fell across Shostakovich’s own life when Pravda published its infamous denunciation of Lady Macbeth (probably written by Stalin himself), ‘Muddle not Music’. For months, Shostakovich (‘his face was a bag of tics and grimaces,’ a friend later recalled) kept a packed suitcase by the front door of his apartment, expecting arrest at any moment.

The harsh, experimental music of Shostakovich’s operatic style is a world away from the romantic melodies, classical form and conservative harmonies of the Cello Sonata; one cannot help thinking that Dmitri’s life might have been very different had the Mozart-loving Stalin attended the premier of this Sonata, on Christmas Day 1934 with the composer at the piano, rather than a performance of Lady Macbeth. The ‘cello dominates the opening Allegro non troppo. In the development, a spiky rhythmic motif punctuates the flowing texture of the opening theme. Brisk arpeggios open the second movement, a lively Scherzo. A repeated ostinato pattern shifts restlessly between the instruments and the music lurches wittily from key to distant key until the ostinato figure returns and the movement ends abruptly. The soulful Largo seems to evoke a wintry landscape in late afternoon, the music, illuminated by the occasional icy dissonance, eventually evaporating into the twilight. The last movement Allegro is a rondo, the main melody appearing four times, interspersed by sparkling scale passages on the piano, before returning for a final, decisive flourish.

Born in Dorset in 1977, Natalie Clein first came to widespread attention in 1994, aged 16, when she won the BBC Young Musician of the Year Competition, playing the Elgar Cello Concerto, a work which also brought her victory the same year in the first-ever Eurovision Competition for Young Musicians.

Subsequently, Clein studied at the Royal College of Music, where her teachers were Anna Shuttleworth and Alexander Baillie, and where now she is a Professor of Music. For four years, from 2015, Clein was Artist in Residence and Director of Musical Performance at Oxford University.

Enjoying dual French and Swiss nationality, Cédric Pescia was born in Lausanne in 1976.  He studied piano at the Conservatoire de Musique in Lausanne, the Conservatoire de Musique in Geneva, the Universität der Künste in Berlin, and the International Piano Academy Lake Como in Italy.  He won First Prize at the 2002 Gina Bachauer International Artists Piano Competition held in Salt Lake City.

In addition to his many orchestral appearances, Pescia is an accomplished chamber musician and performer, which is reflected in his artistic directorship of the Lausanne chamber music series Ensemble enScène.

In 2012, Pescia was appointed Professor for Piano at the Haute Ecole de Musique de Genève.

Schubert: Natalie Clein’s earlier recording of the Schubert seems to have been deleted, although downloads are available from online retailers. A superb full price CD from Hyperion CDA68227 has the Chopin Cello Sonata as coupling. Steven Isserlis (cello) and Dénes Várjon (piano) give inspired performances, and the recording quality is excellent.

On Naxos 8.550654 (medium price), Maria Kliegel (cello) with Kristin Merscher (piano) give excellent performances of the Schubert, coupled with miscellaneous pieces for cello & piano by Schumann.

Shostakovich: Cello Sonatas by Shostakovich, Borodin, Rachmaninov plus Rachmaninov’s Vocalise, are given fine performances in BIS’s superb sound on BISSACD1858 (full price). The SACD will play on all normal CD players.

At medium price on Naxos 8.557722, Dmitry Yablonsky (cello) with Ekaterina Saranceva (piano) give an exciting performance of the Shostakovich, coupled with the Violin Sonata and the Romance from ‘The Gadfly’.