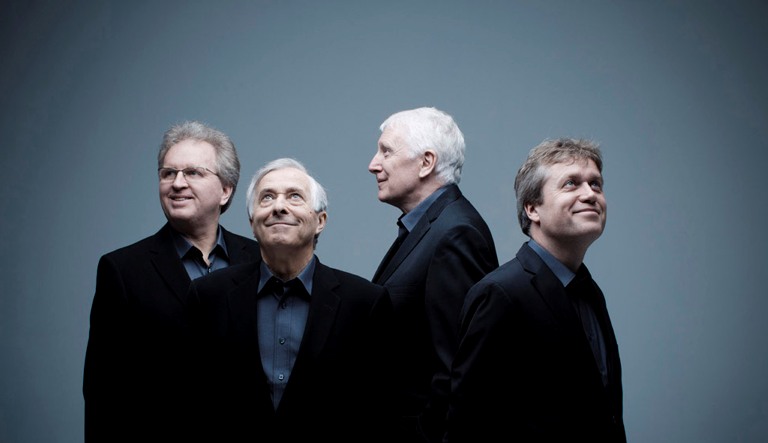 Starting with Piers Hellawell’s colourful 1956 settings of texts by Nicholas Hilliard, the programme includes favourite pieces from their repetoire: old and new, sacred and secular. The music ranges from the Gloria of Machaut’s famous Messa de Notre Dame (14th C.), sacred music by Robert Fayrfax (15th C.), Renaissance Madrigals from the 16th C., to works from our own time. Gavin Bryar’s First Book of Madrigals was writtem for the Hilliards and pieces by Avro Part bring us into the 21st C.

Unrivalled for its formidable reputation in the fields of both early and new music, The HILLIARD ENSEMBLE of four voices is one of the world's finest vocal groups. Their extraordinary schedule shows them in five months in 2010 in: Spain, Italy, Holland, Canada, Germany, Austria and Estonia as well as this country, with four concerts at the Barbican.

Three Doesn’t Make a Crowd at the Ilkley Concert Club

The Hilliard Ensemble is a male-voice quartet that has gained an international reputation for performing music of both the remote past and the present. As well as medieval and early renaissance music their repertoire includes twentieth and twenty-first century music and much of it has been written especially for them; by James MacMillan for example in his wonderful Quickening (1998). They have also collaborated with the Norwegian saxophone player Jan Garbarek, mixing thirteenth and fourteenth century music with jazz improvisation. Their promised programme showed this eclecticism with pieces from their core early music repertoire mixed with music by living composers such as Piers Halliwell, Gavin Bryars and Arvo Pärt.

Sadly the indisposition of David James (countertenor) meant that the ensemble was reduced to three singers only. This had a drastic effect on the programme confining it largely to medieval music, which although of high quality, is for many somewhat recondite in style. It uses what to our ears are esoteric ways of structuring sound and lacks the comforts of the traditional harmony familiar in the work of later composers. Furthermore for the non-specialist listener, particularly in the first half of the concert there was a debilitating monotony in the music, often lugubrious and almost always in compound time (think The Archers tune for the rhythm and medieval Monty Python for the mood).

The revised programme was a big disappointment to the many who had keenly anticipated what had been advertised. Of course the change could not be helped, but what was offered instead was inferior. Although there were some skilful performances the group failed to communicate with the audience despite baritone Gordon Jones’ spoken introductions. It had been a virtually full house, but when the ensemble returned for the second half of the concert over fifty seats were now empty.

There was some leaven, an anonymous thirteenth century Stirps Iesse gave relief from the predominating three-part texture with its sequence of solos and the short solo Natus Est Rex was expressively sung by Rogers Covey-Crump. He was joined by Steven Harrold for Perotin’s Dum Sigillum, in a performance that showed fabulous vocal control, but could not sustain interest over its excessive duration.

The twentieth century pieces were a disappointment, Rodney Sharman’s severe Passing of the Claimantlacked personality, and Elizabeth Liddle’s Whale Rant didn’t come off, partly because of the baritone’s insecure intonation, something evident elsewhere in the concert, for example in Passacali della Vita where there were noticeable differences of intonation in the repeating bass part.

Given their high reputation (and the high fee that it commands) this concert was a real let-down. It did nothing to enhance that reputation, and little to further the cause of early music.