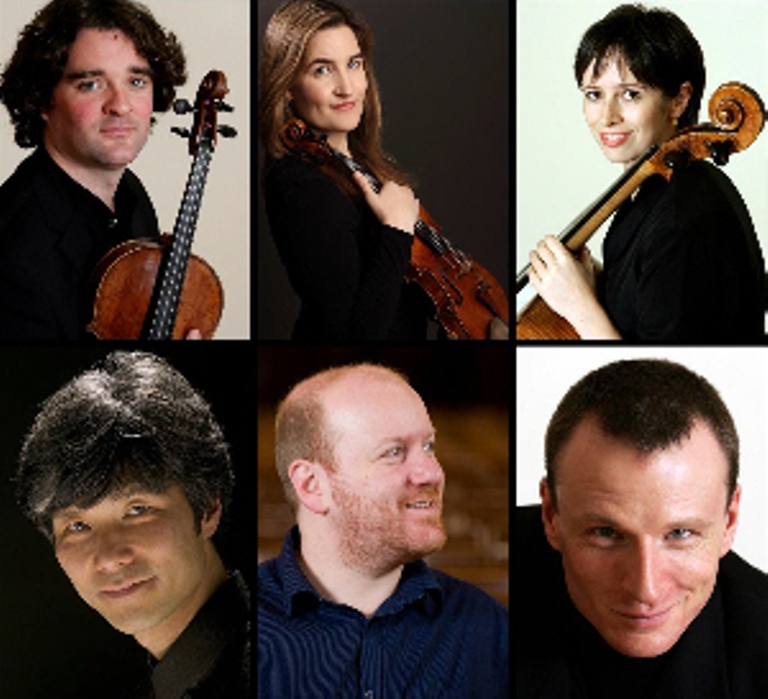 The London Bridge Ensemble Daniel TONG piano, Laura SAMUEL & Ken AISO violins, Tom DUNN viola, Kate GOULD cello and Ivan LUDLOW baritone has now firmly established itself as one of Britain’s most exciting and brilliant chamber groups. Here is a rare chance to hear the exquisite setting by Barber of Matthew Arnold’s “Dover Beach” along with other rarely played song settings for baritone and chamber ensemble. They finish their programme with one of the most joyful, optimistic and tuneful chamber works ever written.

A strong and welcome feature of this concert season is the number of unusual programmes  –this one was a fine example. The works featured were all written within a span of forty-five years.

They began with the eponymous Bridge Phantasie Piano Quartet.  For many listeners Frank Bridge is remembered as Benjamin Britten’s composition teacher who he admired for his rigorous craftsmanship. So it was good to hear Bridge’s music and to experience that craft allied to the expressive warmth and richness that the players projected so well. In the rarely heard ‘Three Songs with Viola’ Tom Dunn’s playing brought out the melancholy that reflected so well the poignancy of World War 1. Bridge himself was a professional violist and comparison of these songs with the more familiar Brahms songs with viola showed game, set and match to Bridge.

George Butterworth’s ‘Love Blows as the Wind Blows’, is a great rarity.

Written in 1912, just four years before he was killed in the Battle of the Somme, there is a sadness and intensity inherent in the music that the young performers captured with great sensitivity.

Before the interval the same players returned for Samuel Barber’s ‘Dover Beach’ for baritone and string quartet, written before he had found his individual American voice. It is his earliest regularly performed work. This setting of Matthew Arnold’s profoundly pessimistic poem is difficult to bring off and Ivan Ludlow’s rich, dark baritone suited this piece admirably.

After the interval we entered a completely different world. Sadness never lasts for long in the music of Dvorak; surely one of the most spontaneous-sounding composers whose lovely tunes and folk-like gestures should fill the listener with gratitude, as did this performance of the Piano Quintet op.81. From Kate Gould’s opening cello solo we knew that this performance was in safe hands. When the writing became more strenuous the piano never dominated. Indeed throughout the concert, pianist, Daniel Tong, never overpowered the other performers. There was a lovely restatement of the main theme by violinist Laura Samuel and the dreamy start to the development section was beautifully done by all the players. A gentle melancholy by the viola began the Dumka and a delicacy in the flowing music followed. The dance-like quality of the contrasting Vivace sections was well caught, and where the melodic interest is given to the second violin, Ken Aiso, shone. The Furiant had true Czech flavour and in its Trio the cross-rhythms that typify it were spectacularly played.

The Finale was given a joyous performance, the piano especially dexterous. Its wistful coda was magically done and the final sprint to the finishing line brought richly deserved applause for this performance and for the fascinatingly conceived programme.