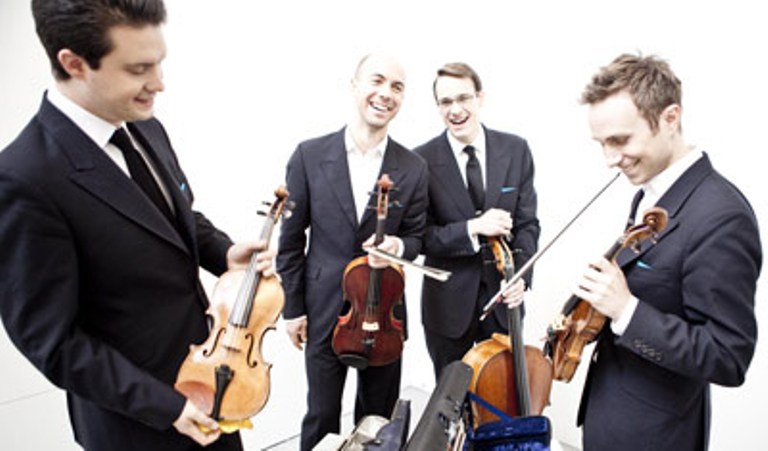 Described by Gramophone Magazine as ‘one of the finest young string quartets’, whose members are ‘musicians with fascinating things to say’, the Doric String Quartet have received exceptional praise for their Haydn performances. Their first CD, the complete Korngold String Quartets, was released in September 2010 and featured as one of the 2010 “Critic’s Choice” discs in Gramophone. In 2008 they won first prize at the Osaka International Chamber Music Competition and second prize at the Premio Paolo Borciani International String Quartet competition. Highlights of 2011 include the Doric’s American debut at the Frick Museum in New York and the Library of Congress in Washington.

A Highlight of the Season at the Ilkley Concert Club

The Doric Quartet has received high praise in the musical press and their first visit to Ilkley was eagerly awaited; we hope it won’t be their last. They gave us an evening of high-octane music-making that will be long remembered. Their cellist, acting as lively compère for the evening, congratulated the club on its full house, something that even an award-winning group such as this can’t be guaranteed in other venues! The impact of their playing on the audience can be gauged not only by the vociferously enthusiastic applause it received, but also by the complete sell-out of key works in their repertoire on CD in the interval.

Their interpretations were deeply thought through and their technical control was total. Their use of vibrato was masterly. In the Haydn Quartet Op 20 No. 4 occasional key notes were stressed by its subtle use, otherwise it was absent, yet the raw scrawny vibrato-less tone that some ‘period’ groups produce was totally avoided. In the second movement of the Schubert ‘Death and the Maiden’ Quartet the contrast between the vibrato-less theme and the ensuing variations where it was sometimes richly deployed was telling.

In the scherzo of the Korngold Quartet no.3 the virtuosity of the playing, especially the bowing and the powerful pizzicati was remarkable. The clever use of portamento (slides between notes) in the trio which recycles music from a film score, took us straight back to Hollywood. Throughout the quiet playing was especially noteworthy, the sound sometimes approaching inaudibility with magical effect. Equally telling where bold forceful effects were required they gave their all.

This was some of the most musically colourful playing I’ve heard from a string quartet. But all this technical excellence would be as nothing if the imagination and creative insight into what the music was about was lacking, but it was there abundantly. Their interpretations took such exciting risks; as a keen-eared audience member said to me afterwards ‘you have to be young to be that brave’.

The Auryn Quartet are recording all the Haydn Quartets and their performances of the Op.20 set are superb. The discs are very well recorded and make an excellent first choice on Tacet 187 (2 CDs at medium price). A very good alternative is provided by the Buchberger Quartet who give very lively readings of all the Op. 20 Quartets on Brilliant Classics 93545 (2 CDs around the cost of 1 Naxos disc). The Buchbergers play less repeats than the Auryn Quartet.

Tonight’s artists have made an excellent recording of all 3 Quartets on Chandos CHAN 10611 (full price). The performances have been critically acclaimed and the recording quality is very good.

The Takacs Quartet moved from Decca to Hyperion, and their disc of Schubert’s 13th. And 14th. (Death and the Maiden) Quartets have received highly justified superb reviews. The recording quality is excellent and the CD is on Hyperion CDA 30019 (medium price). For around the same price there is a 2 CD set from Decca 446 163 2, where the Quartetto Italiano give warmly romantic performances of the last 4 Schubert Quartets. The analogue recording has been very well transferred to CD.