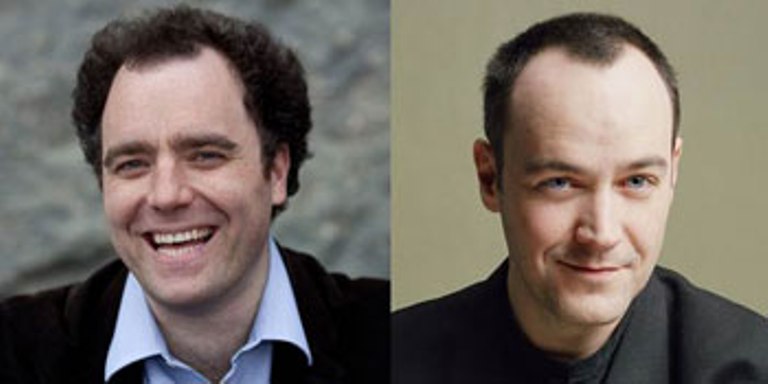 We are privileged in welcoming Adrian Brendel to replace Guy Johnston and to be able to present an almost unchanged programme (Cello Suite No.3 replaces No.4)

Adrian Brendel’s close musical relationship with his father Alfred Brendel has led to many chamber music appearances throughout the world and culminated in much heralded performances and a Philips recording of Beethoven’s complete music for cello and piano. He is a regular participant at many international festivals including, in the UK, at Aldeburgh, Cheltenham and Oxford. Plans for the 2011/12 season include recital appearances in Bern, Winterthur, Calgary and Napa Valley. A finalist in the Leeds Piano Competition, Leon McCawley has enjoyed fruitful collaborations with a range of ensembles and musicians including horn player David Pyatt (here at Ilkley in 2009). He has played in the BBC Proms Chamber Series, BBC Radio 3 Lunchtime Series, and at the Aldeburgh, Brighton, Cheltenham and Edinburgh festivals.

A Brendel to the Rescue

The advertised cellist having let us down at quite a late stage, the Concert Club was able to persuade Adrian Brendel, who last played for us in 2005, to take his place. This was in no sense a substitution, in fact in the opinion of the many I spoke to afterwards we had greatly benefited from the exchange. The cleverly structured programme, apart from a different Bach cello suite, was unaltered. They began with the early Samuel Barber Sonata, a work whose texture shows the influence of Brahms, with all the concomitant problems of balance this presents. Nevertheless even with the piano lid fully open, Leon McCawley’s full-bloodied playing was always considerate of his partner’s part. There was eloquence in the middle movement’s slow sections and its tricky central scherzo was played with real virtuosity; the testing finale performed with real panache.

Adrian Brendel then gave us the third of Bach’s suites for solo cello. The opening Prélude had proper improvisatory freedom, an imaginative realization of Bach’s apparently plain text. In contrast the movements that followed never lost the feeling of regular pulse that is so essential to music that derives from the dance. Brendel’s approach was richly involving, respecting the music’s baroque ancestry but using all the resources of the modern instrument.

Leon McCawley made a clever bridge to the second half of the programme with his wonderfully coloured performance of Barber’s chopinesque Nocturne. The duo concluded with Chopin’s late Cello Sonata. The lengthy opening section of the first movement was repeated which enabled us to hear the expressively played second subject an extra time. The scherzo was deftly done, the slow movement had wonderful simplicity and the virtuosic demands of the finale were excitingly met.

It had been a wonderful evening of music-making from both artists and it received grateful applause and cheers. As a further reward their perfectly chosen encore was the first of Schumann’s Five Pieces in Folk Style, played with
elegance and mischief.

The two Barber items are well catered for on a budget EMI CD 234 473 2. Alan Stepansky plays the cello with Israela Margalit at the piano, and the couplings are other Barber chamber works. The performances and recordings are very good.

There are so many excellent recordings of the Cello Suites that it is almost a case of “choose your favourite Cellist”. My personal favourites for the 6 Suites (2 discs) are Pierre Fournier on Archiv 477 6724 and Janos Starker on Sony 88697703262. Both sets are well recorded and at budget price, the latter at under £5.

An excellent recording, released in 2008, features Alban Gerhardt (cello) and Steven Osborne (piano) on Hyperion CDA67624 (full price). The unusual and interesting coupling is Alkan’s Cello Sonata in E. A very good budget alternative is on Naxos 8.553159 where Maria Kliegel (cello) and Bernd Glemser (piano) give fresh, attractive performances of Chopin’s complete works for Cello and Piano, including several arrangements, and they are very well recorded.