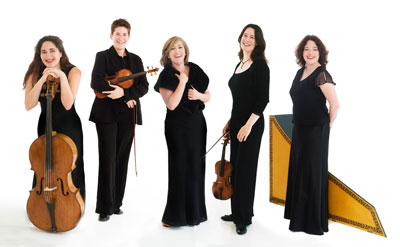 The Brook Street Band has rapidly established itself as one of the country’s foremost interpreters of Handel’s music. The name comes from the street in London’s Mayfair where Handel lived and composed for much of his working life. Nicki Kennedy has a warm voice of considerable agility and flexibility. This, coupled with a sparkling personality, great musicality and linguistic ability has made her a favourite with audiences.

After last year’s very dispiriting baroque concert it was a relief to experience one where the players communicated so well with their audience both in their performance approach and in their brief spoken introductions.

The three purely instrumental items were played stylishly and with evident enjoyment, no po-faced purity here! The Bach pieces were arrangements of two of his organ trio sonatas which in theory should work well, but I was not entirely convinced by the change of instrumentation despite the enthusiastic advocacy of the playing. The Handel trio sonata which engagingly recycles music he’d written earlier was originally conceived for strings; it felt more idiomatic and was given a lively performance.

The undoubted star of the show was the soprano Nicki Kennedy. The counter-tenor James Bowman when asked to comment on the difference between Bach and Handel replied ‘As a singer, Handel’s always on your side’. He understood singers and his music provides a vehicle for his virtuoso singers to demonstrate their skill and musicality to the full; Nicki Kennedy made the most of the challenges offered her.

The two Handel Italian Motets were sung with warmth and joy, especially in their final Alleluja sections and the concert’s Gloria encore. She has superb vocal control, she sang complex runs of notes with pin-point accuracy, her breath control is remarkable and her tone full and generous. Her rapport with the violinists (whose part often interwove with her solo line) was infectious bringing the sunlight into what had been a drab and cold day outside.

But the centre piece of the concert, Handel’s extraordinarily operatic cantata La Lucrezia was the highlight of the evening. With an accompaniment of just cello and harpsichord Handel conjures up a whole world of vivid emotions that were powerfully projected through Nicki Kennedy’s singing and expressive gestures. Those who followed the printed text in the programme missed so much, there was no need for translation from the Italian, her voice and body said it all.

Handel-La Lucrezia: This work is included on a very impressive disc of Handel’s Italian Cantatas, performed by Magdalena Kozená (mezzo) and Les Musiciens du Louvre conducted by Marc Minkowski. Ms Kozená certainly brings out all the drama of the work and is very well recorded on Archiv 469 065-2 (full price). There is a critically aclaimed alternative with the late lamented Lorraine Hunt Lieberson on Avie AV 0030 (full price) where, as well as the Cantata, she sings arias from Handel’s Theodora and Xerxes.

Handel-HWV 231 & 239: The ever reliable Emma Kirkby (soprano) with London Baroque include these works on a CD of Handel’s Sacred Cantatas. BIS, as always, provide excellent recording quality and the performances are quite lovely on BIS-CD-1065 (full price)..