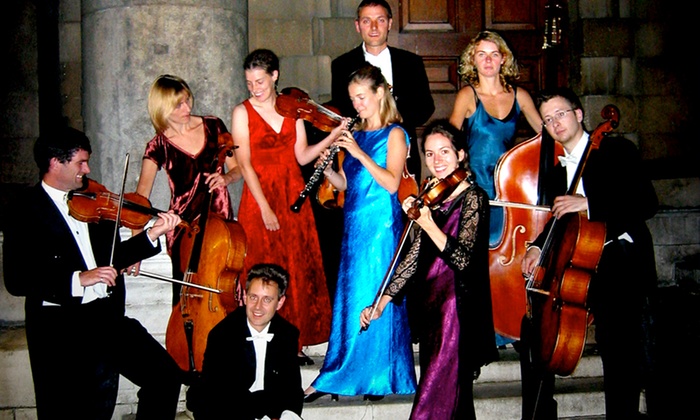 An exuberant selection to end the Season; from the young genius of Mendelssohn to Elgar at his most charming; from Eastern European dances to Piazzolla’s Tango revolution in Argentina. Under the dynamic leadership of Adam Summerhayes (“to die for” The Strad), London Concertante is one of the finest chamber ensembles in the country, its players brought together through a shared passion for chamber music. The group has the rare ability to combine flexibility of instrumental grouping whilst consistently maintaining superb artistic endeavour.

A Celebratory End to the Season at the Ilkley Concert Club

This group of nine string players has a reputation for imaginative programming that includes, as well as standard classical fare, music whose roots are world-wide and folk inspired. Communication with their audience is very immediate, not only in the way they project themselves as players but also in the witty compèring of the show by cellist Chris Grist.

The first half of concert began with Mozart’s Divertimento in D K136. This ‘easy’ piece is a favourite with school orchestras; I’ve done it more than once with youngsters but with nothing like the finesse and imagination displayed by this group. Their phrasing and bowing were so imaginative, what could have been a run–through of a familiar minor classic became a newly-minted joy.

The Elgar Serenade for Strings is a major classic. In the outer movements, whilst not underplaying their essentially wistful nature the playing was rhythmically alive and alert. The slow movement is the highlight of the piece and was beautifully and glowingly done. That just nine players could match memories of Barbirolli and the Hallè was remarkable.

The Mendelssohn Tenth String Symphony offers fewer opportunities for a nuanced approach but the Bartok Romanian Folk Dances certainly do and all their colouristic aspects were engagingly projected.

The music after the interval was all folk-inspired, either Gypsy or Argentinian. The sound of strings, and the violin in particular is the essence of Hungarian Magyar music and the performances were full of fire, the leader, Adam Summerhayes completely at home with the style in his virtuosic solos. Yet the Piazzolla items were as convincing despite their less authentic garb, especially in their version of Libertango with its ear-tickling percussive string effects to spice the texture.

With this concert David Pyett’s long tenure as Chairman of the Ilkley Concert Club came to an end, but he will continue to advise and inspire in his new role as President. So no regrets, this was a celebratory evening and the London Concertante did him proud.

Most of the items in tonight’s concert are available, performed by London Concertante, on the Zum label, and downloads are available from iTunes and Emusic. There is also a full price Harmonia Mundi CD (HMU 907491) entitled “Piazzolla and Beyond” which includes Libertango. The following recommendations have the more conventional orchestrations.

Mendelssohn: There seems little to choose between the various recordings, but I do like the version from the Northern Chamber Orchestra conducted by Nicholas Ward. The disc contains String Symphonies 10-13 and is on Naxos 8.553163 (mid price).

Bartok: An excellent 2 disc set from Sir Georg Solti and the Chicago S.O. includes the Concerto for Orchestra, Music for Strings, Percussion & Celesta, and Dance Suite, as well as the Rumanian Dances and others. The recording quality is excellent, and the CD is from Decca 470 516 2 (budget price).

Brahms: The complete orchestrated Hungarian Dances are available from Naxos 8.550110 (mid price). Istvan Bogar conducts the Hungarian S.O. in performances which are some of the best available.