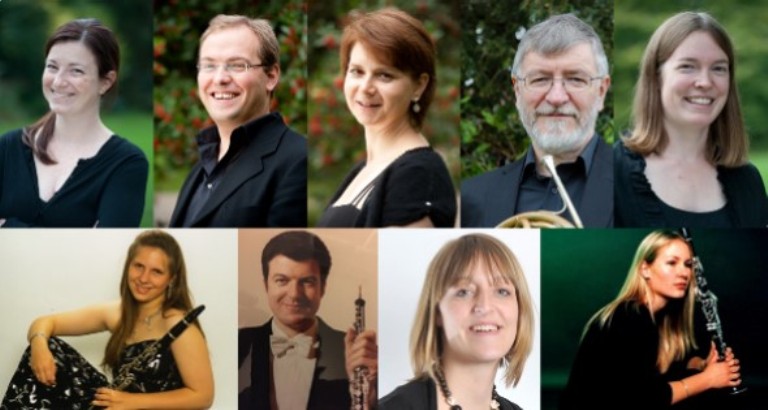 For our final concert the Aurora Wind Ensemble has increased from five players to nine, in order to present us with an imaginative programme of octets and a nonet. Prize winners at the European chamber music competition, Musique d'Ensemble, held at the Paris Conservatoire in 2001, the Aurora Ensemble has performed in many major venues across the UK, including the King's Hall Ilkley in 2015!

The wind band of oboes, clarinets, horns and bassoons, or Harmonie, was a musical obsession in Vienna at the turn of the nineteenth century. Triebensee and Krommer were composer/directors supplying this need, arrangements of popular opera as well as original works. We shall hear one of Mozart's wind serenades, followed by Beethoven's early work, inspired by Mozart. Gounod's Petite Symphonie adds a flute to the mix, and rounds off a delightful programme. 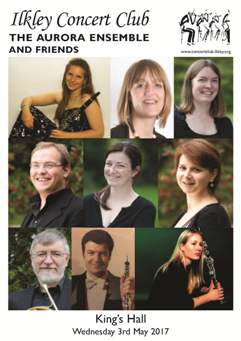 A feast of Harmonie at the Ilkley Concert Club

For the final concert of their 71st season, Ilkley Concert Club members gave a warm welcome to the return of the Aurora Ensemble. Aurora are normally a wind quintet of flute, oboe, clarinet, horn and bassoon but on this occasion they were joined by friends who allowed them to play as an octet of two each of oboes, clarinets, horns and bassoons. Music for this group of players was immensely popular in late 18th and early 19th century Vienna and known as Harmoniemusik.

An arrangement of Mozart’s Don Giovanni overture started us off, appropriately dark and foreboding in the slow introduction with its chords representing the don’s nemesis, the Commendatore, but full of light agile playing in the subsequent allegro. Franz Krommer is best known for his Harmonie pieces and his Octet in F major tested the virtuosity of the players to the limit. It is a lively piece, full of invention, often featuring skirling oboes competing with the more mellifluous clarinets against accompanying figures in the lower instruments: concluding with a charming polonaise containing a delightful duo for the two bassoons.

The superiority of Mozart as a composer for this group of instruments was amply displayed in his early wind serenade K375, here given a splendidly rich performance. You felt that each instrument was given its own voice and allowed to shine through the ensemble at some point, although the oboes, which were a second thought for the composer, clearly carry the melody less than the clarinets.

Beethoven’s Rondino in E flat opened the second half: here the horns played a prominent part and rounded off this short piece with two little duo episodes, the second a muted echo of the first, as if the group were receding into the distance.

Finally the Aurora’s flautist was allowed out of the dressing room to make up a nonet for a performance of Gounod’s delightful Petite Symphonie, full of glorious tunes and almost Mendelssohnian Romanticism – a real treat for the ears and a wonderful way to end the season!
CJS

The Budapest Wind Ensemble perform the Octet, Partitas in E flat and B flat, and 3 Marches on a well-recorded Naxos CD – 8.553498 (mid price). A good budget price alternative has the Rotterdam Philharmonic Wind Ensemble playing Op. 57 and partitas Op.67, 69 and 79.

A very recent recording from the Scottish Wind Soloists on Linn CKD 479 (CD/SACD full price) is very attractive, and also contains 4 Mozart’s Divertimenti. The recording quality, as usual from this label, is excellent. A medium price alternative has the Wind Ensemble Sabine Meyer, and also includes the Serenade No. 10 on Warner 9538242. The performances are sympathetic and the recording quality is very good.

Finding a commercially available single CD containing the Rondino has proved rather difficult, but the performance by Il Gardellino on Passacaille PAS 1016 (full price) can be recommended. Beethoven’s Octet and Quintet complete the disc.