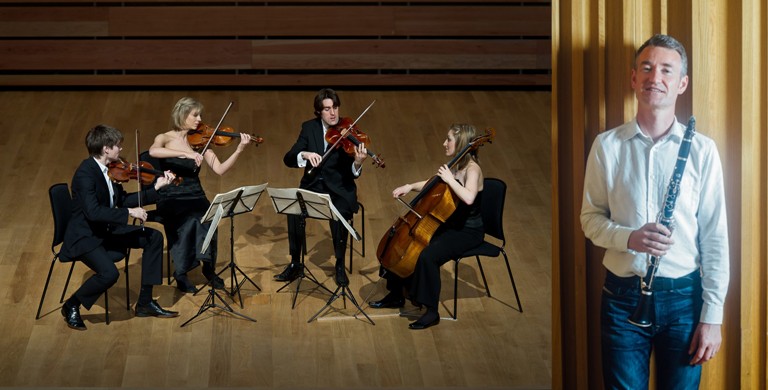 A Quartet for the new millennium, the Sacconi has a reputation for reaching out to audiences with infectious energy and enthusiasm. Their style, commitment and fresh imaginative approach has gained them an international following and a busy schedule. For Ilkley the quartet is joined by clarinettist Robert Plane. Since winning the Royal Overseas League Music Competition in 1992, Robert's solo and chamber music career has flourished world-wide. No stranger to ICC, Robert is remembered for his eloquent, impassioned playing.

Mozart's sublime Clarinet Quintet starts the concert – despite seeming to reflect an aching despair this music manages to smile through the tears. York Bowen's Phantasy Quintet from the 1930s is for the rarely-heard bass clarinet: the late romantic idiom brings darkness and intensity to this one-movement work. We finish with the first of Haydn's last set of quartets, grandiose and symphonic in breadth and construction.

A Perfect Partnership at the Ilkley Concert Club

It was a pleasure to welcome the Sacconi Quartet and Robert Plane (clarinet) back to the Ilkley Concert Club for this Wednesday’s concert. The programme began with a performance of Haydn’s D minor string quartet from op 76 which demonstrated clearly why this relatively young ensemble is so highly rated. They clearly enjoy playing together and gave a lively and thoroughly convincing account of the work. Their style is clearly informed by historical performance practice but not slavishly so and is distinguished by the intensity with which they relate to each other, each performance developing as a true conversation between equals. There was wonderful warmth in the hymn-like texture and accuracy in the pizzicato chords which accompanied the first violin in the slow movement and a delightful playfulness in the execution of the rustic canon of the minuet – surely one of Haydn’s better jokes!

Robert Plane joined the quartet first for the Phantasy Quintet for bass clarinet by York Bowen, a highly chromatic piece in a late romantic style. An audience which earlier in the season had heard Verklärte nacht might even have noted some similarities with early Schoenberg! The rich chocolate tones of the bass clarinet contrasted with but never dominated the texture, showing what an excellent ensemble player Robert Plane is.

Even in the much more concerto-like Clarinet Quintet of Mozart which followed the interval, Plane remained a member of a chamber ensemble rather than a soloist. Playing a basset clarinet, for which the work was probably written, his virtuosity was never in doubt. He spun a wonderful limpid solo line through the slow movement but was content to become part of the accompaniment when that was called for. The Sacconi Quartet were excellent partners here as before, shining particularly in the first trio of the third movement.

The enthusiastic applause was followed by a performance of Glazunov’s Oriental Reverie, a dream-like piece evoking all the exoticism which Russians from west of the Urals found in the souks of Samarkand!
CJS

An old favourite, that in my opinion has not been surpassed, is on Hyperion CDA66199 (full-price). Thea King (basset clarinet) and the Gabrielli String Quartet give superb readings of the Quintet and the Clarinet Concerto, the latter with the English Chamber orchestra conducted by JeffreyTate. A good budget alternative has Karl Leister (clarinet) and the Berlin Soloists on Apex 0927443502. The coupling is the Brahms Clarinet Quintet.

The Takács Quartet perform all six Op.76 Quartets in lively and understanding performances on a naturally recorded Decca two disc budget priced set – 475 6213. For a slightly warmer performance the Kodaly Quartet play the first three Op.76 Quartets on Naxos 8.550314 (medium-price). The Kodaly Quartet have successfully recorded all the Haydn Quartets, and they are at their best in OP.76