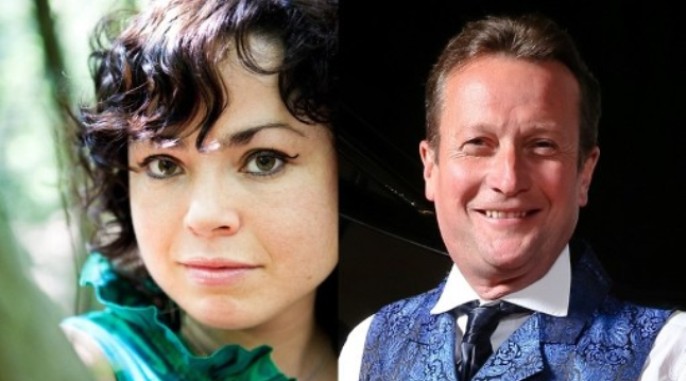 Unfortunately Maxim Rysanov, who was scheduled to play injured his shoulder and was unable to play for us.

Our pianist, Katya Apekisheva, recommended Philip Dukes ('Great Britain's most outstanding solo viola player - The Times') and we were delighted to have been able to secure his services. 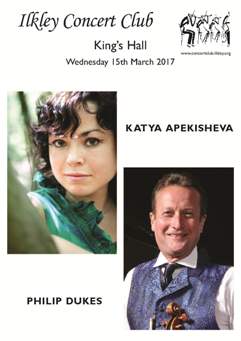 Viva the viola at the Ilkley Concert Club

Pity the poor viola player! – treated by other orchestral players as a failed violinist and the butt of their wickedest jokes. No wonder there are so few solo violists on the concert stage – Ilkley Concert Club was lucky to have Philip Dukes to replace the injured Maxim Rysanov in this concert of music for viola and piano.

As he pointed out in one of his lively introductions, the instrument also suffers from a lack of repertoire before the twentieth century. Earlier repertoire consists largely of arrangements, in this case works by Schumann and Brahms for clarinet and piano and the Schubert sonata in A minor, D821, written for the ungainly and little-mourned arpeggione.

This work is often played by cellists but Philip Dukes and Katya Apekisheva (piano) made a convincing argument for the supremacy of the viola in this sonata. The balance between the two was excellent and the virtuosity of both players contributed to a thrilling account, particularly of the closing allegretto.

Immediately before this Katya Apekisheva had given sparkling performances of Chopin’s first two impromptus, with feather-light articulation in the right hand and sumptuous tone from the left hand, especially in the nocturne-like opening of the second impromptu.

Britten’s Lachrymae of 1950 was the only piece written for the viola, a set of variations on a Dowland song. Here Philip Dukes showed complete mastery and met every technical demand with ease but listening to it was, for your reviewer, a curiously un-engaging experience.

In the Brahms F minor sonata which concluded the programme, as with the Schumann that began it, there were problems of balance. The piano writing was at times so dense and its sound so strong that the viola was inaudible towards the bottom of its range. One missed the distinctive timbre of the clarinet which allows it to be heard in such passages. Nevertheless the players gave a rapturous account of the exquisite slow movement of the Brahms and received the usual warm Concert Club appreciation for their efforts.

Louis Lortie is working his way through Chopin for Chandos, and the third volume has attracted high praise (Chandos CHAN 10813 full price). As well as the Impromptus the disc contains a selection of Nocturnes and Piano Sonata no 3. As an alternative the incomparable Arthur Rubinstein performs the complete Waltzes and Impromptus on RCA 09026630472 (upper-budget price).

Tabea Zimmerman (viola) and Kirill Gerstein (piano) are the superb performers on this well recorded CD from Myrios Classics-MYR008 (full price). The convenient coupling is the Viola arrangement of Cesar Franck’s Violin Sonata.

The Lachrymae is performed by Martin Outram (viola) and Julian Rolton (piano) on an interesting CD from Nimbus-Alliance NI 6253 (full price). The couplings are Frank Bridge’s Pensiero, and arrangements for viola and piano of ‘There is a Willow grows aslant a Brook’ and the Violin Sonata. Britten’s Portrait no 2 and Reflections accompany the Lachrymae. Should you prefer the version with chamber orchestra, Philip Dukes is the soloist with the Northern Sinfonia conducted by Steuart Bedford. The disc is from Naxos 8.557205 (medium price), and the other Britten works are Simple Symphony, Temporal Variations, A Charm of Lullabies, and A Suite on English Folk Themes.
Raymond Waud.