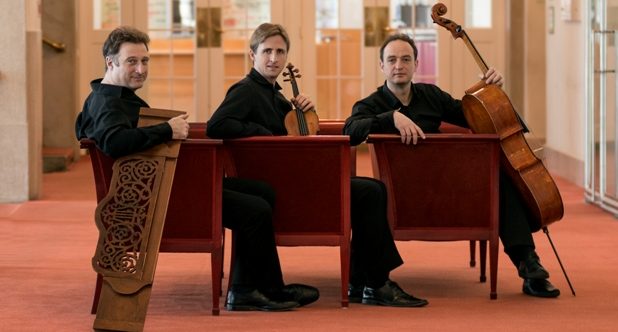 The Vienna Piano Trio was formed in 1988. Delivering a combination of 'gravitas and panache' (The Strad), the trio debuted at Wigmore Hall in 1994. Two years later they returned and performed all Schubert's works for piano trio, then repeated the programme at the Brahms-Saal of the Musikverein in Vienna. Particularly successful in repertory by composers closely associated with Austria - Brahms, Schubert, Haydn and Mozart – these players exhibit traditional Viennese sentiment with sensitivity to the nuances of folk tradition.

The programme begins and ends with the first trios of Mozart and Schubert respectively – a bare 40 years between them – the first elegant and charming and the second profound yet strangely carefree. As a contrast we will hear the trio version of Schoenberg's early sextet based on the poem Transfigured Night – one of the masterpieces of late romantic chromaticism – speaking of overwhelming love and forgiveness. 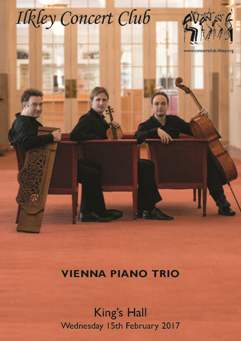 From the very beginning of their recital at the Concert Club on 15th February you could tell that the Vienna Piano Trio is a group which plays together frequently. Ensemble is such a fragile quality that it can easily be disturbed but with these three musicians there was never any chance of that.

In Mozart’s G major trio, K496, the piano of Stefan Mendl led the way as the music demands but his beautifully light crisp touch never threatened to dominate the texture. The opening Allegro drew delightful playing from all three players. The Andante starts simple and bright but develops a darker side, the thematic material coming back in ever more complex disguises, well brought out here. The final set of variations gave a satisfactory finish to a fine piece of Mozart playing.

Schoenberg’s Verklärte Nacht is more usually heard in the original string sextet version but the trio version, with the piano providing much of the accompanying matter, brings to the fore the characters of the two lovers from the poem which provided the composer’s inspiration. David McCarroll (violin) and Matthias Gredler (cello) were here in their element, providing yearning melodies, luscious pianissimos and shimmering tremulos, gaining rapt attention from an audience, many of whom may have been surprised that Schoenberg could create such beauty!

A rousing performance followed of the Schubert B flat major trio, bright and joyous despite being finished in the year of his death. The first movement emphasised again the interplay of the parts and the players made much of the playful pauses which threaten prematurely to end the movement. The cellist began the second movement with a wonderfully calm account of the melody: the dancing in the third movement was lively and spirited and the fourth movement rounded off a splendid concert in a more vigorous Beethovenian style.

One of the finest recordings of this work to have come my way is by the Kungsbacka Piano Trio on Naxos 8.570518 (medium price). The couplings are the Piano Trio K.502 and the Divertimento K.254. The ever reliable Beaux Arts Trio provide all the Piano Trios and the Clarinet Trio on Decca 446 1542 (2 CDs at budget price).

Those with an enthusiasm for “authentic instruments”, and others, will enjoy the excellent new recording from Andras Staier (fortepiano), Daniel Sedec (violin), and Roel Dieltriens (cello), on Harmonia Mundi 902233-34 (2 CDs at budget price). Both Piano Trios are included with Nocturne D.897. Once again, the Beaux Arts Trio provide superb interpretations of both Trios, on modern instruments, on Philips 475 7571 (2 CDs at budget price).
Raymond Waud.