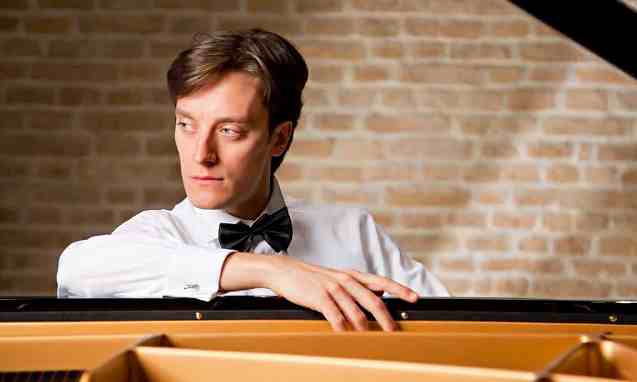 A finalist in the 2009 Leeds International Piano Competition, critics hailed Alessandro as the 'natural successor to his great compatriot Arturo Benedetti Michelangeli'. An artist who can command great power but also exudes exquisite delicacy and lyricism, Alessandro has shown a remarkable, constant development that makes him one of the most interesting pianists of his generation. Always in demand here and abroad as concerto soloist and recitalist, he is also becoming an acclaimed recording artist with his recent CD receiving high praise from the critics.

His programme is a feast of music by pianist composers, largely from the twentieth century. It begins with the four Chopin Ballades and then features solo piano arrangements by Gershwin of his own songs and the immortal Rhapsody in Blue. These sandwich studies by Kapustin and Gulda, both concert pianists but also jazz performers: 'crossover' music in the very best sense. 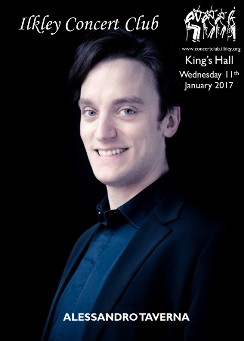 Although this was the debut recital of this young Italian pianist at the Concert Club there were many present who remembered his performances in the Leeds Piano Competition of 2009, at which he gained third prize. Since then Taverna’s reputation has continued to grow and so it was an expectant Kings Hall audience that awaited the demanding first half of the concert, comprising all four of Chopin’s Ballades.

These were performances of great delicacy, the introductory phrases almost understated in their simplicity. Each piece was developed as if being played for the first time, Taverna searching for the inner meaning of the music, never falling back on empty pianism. There was brilliance when it was needed but the music seemed quieter and darker than it is often played. True, there was a good deal of rubato but to me this seemed a natural part of the pianist’s quest for the essence of each Ballade.

The second half was a complete contrast, not so much the wholly satisfying meal presented in the first half as a delightful selection of sweetmeats. A group of Gershwin’s own arrangements of his songs had the audience almost humming along. Two of Kapustin’s concert études served to confirm Taverna’s mastery of all the techniques of jazz piano. The discovery of the evening for me followed: four of Friedrich Gulda’s studies from Play Piano Play including a quirky fugue, a piece based on an insistent ostinato and a brilliant toccata.

To conclude Alessandro Taverna gave us a magical and mercurial account of the solo piano version of Gershwin’s Rhapsody in Blue, filled with both lively impetuosity and aching sadness. The variety of colours that Taverna evoked from the piano made one wonder why an orchestra is ever really necessary for this piece!

An extremely warm reception was forthcoming from the audience and Taverna replied with a performance of Debussy’s Clair de lune of haunting simplicity which showed clearly what a poet of the keyboard this young artist is.
CJS

There are so many excellent recordings of Chopin’s most famous works that it is often a case of choosing your favourite pianist. My current favourite recording is by Ivan Moravec on Supraphon SU 3583-2 (medium price). Various Mazurkas and the Barcarolle Op.60 complete the disc. A more recent recording, at budget price, which has attracted very favourable reviews is by Cedric Tiberghien on Harmonia Mundi HMG 501943. Brahms’s Ballades, Op.10, complete the CD.

An excellent recording, which includes both Gershwin pieces, is performed by Michael Endres on Oehms OC 418 (medium price). A few other Gershwin works complete the disc.

The extremely talented Marc-André Hamelin has all the technique necessary to perform all the Op.40 Concert Studies on Hyperion CDA 67433 (full price). Other Kapustin pieces complete the disc.

Sasha Grynyuk performs Play Piano Play superbly, and completes the CD with works by Glen Gould, including his Piano Sonata. The disc is from Piano Classics PCL 0043 (medium price).