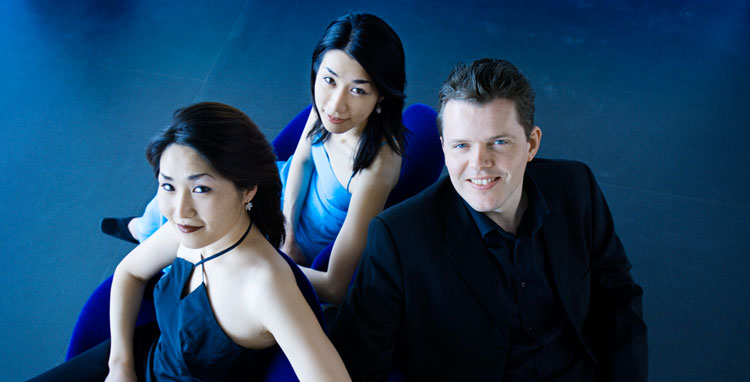 This award-winning piano trio is based in Copenhagen and consists of Danish pianist, Jens Elvekjaer, and two Korean sisters, Soo-Jin Hong, violin, and Soo-Kyung Hong, cello. Founded in Vienna in 1999, Trio con Brio explores the repertoire with ‘freshness and curiosity, respect and reflection’. The group has an intensive worldwide touring schedule and is known for playing of great ‘passion and panache’.

Sven-David Sandström is a prolific Swedish composer and the ‘4 pieces’ were written as a gift to the Trio – a fusion of minimalism and crystalline layers of sound and rhythm. Smetana’s G minor Trio was given its emotional emphasis by the death of his daughter from scarlet fever - a work of great tenderness and some depth. The eerie-sounding slow movement has given the Beethoven D major Trio its nickname and may have been influenced by the ideas for an opera based on ‘Macbeth’ he was discussing at the time. 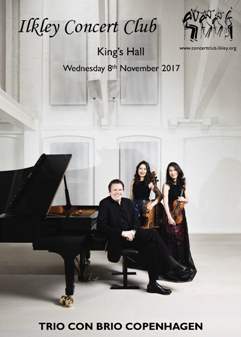 On Wednesday 8 November Ilkley Concert Club listened to a recital by the Piano Trio Trio con Brio Copenhagen and the evening could be summed up as really ‘first rate’ with some beautiful playing by these two Korean sisters and the Danish pianist husband of the cellist.

The first piece had perhaps led to some wrong expectations: a work by the Swedish composer Sven-David Sandström, written in 2012, whose earlier works were influenced by minimalism and his teacher Ligeti. It seems perhaps that Sandström had an almost wicked sense of humour as the pianist told the audience ‘there will be some surprises’ – and so there were! His Four Pieces for Piano Trio was conceived as a work which changed without warning from emotional tonal melodies to repetitive almost harsh chords with elements of minimalism. Written expressively for the trio the clarity and atmosphere created was no doubt just what the composer envisaged, and the performance delighted the audience.

Smetana’s Piano Trio in G minor was a big change, losing the clarity of the Sandström for a more full chordal style which, with the piano lid fully open, the players took advantage of. Throughout the evening Soo-Jin Hong (violin), Soo-Kyung Hong (cello) and Jens Elvekjaer (piano) played with a wonderful range of tone, colour and some beautiful pianissimos, giving an excellent performance of this work which is imbued with sadness, being written shortly after Smetana’s daughter, aged four, died from scarlet fever. A performance to cherish.

Beethoven’s Trio in D, known as the Ghost, was from a very productive period in his life. The lengthy slow movement, marked Largo assai ed espressivo, can be played at many speeds and, for this reviewer, Trio con Brio picked one which was just about right. Slow enough to encompass the ghostly and eerie effect that Beethoven wanted and yet with enough movement to bring out the pauses and almost outbursts which can be really effective. The trio’s performance rightly led to prolonged applause and the fourth movement from Dvorak’s ‘Dumky’ trio as an encore.
David Pyett

There do not seem to be any commercial recordings available.

The Trio Con Brio Copenhagen made a recording in 2012, coupled with the Tchaikovsky Piano Trio, which is amongst the most recommendable of this work. The recording quality is excellent on Orchid ORC 100051 (full price). An alternative, lower price version, with the interesting couplings of the Suk and Novak Piano Trios, is by the Joachim Trio on Naxos 8.553415.

The Florestan Trio have recorded all the Beethoven Piano Trios to great acclaim, and the “Ghost” is coupled with the Piano Trio No.6 and the Allegretto in B flat on Hyperion CDA 67327 (full price). No less accomplished, at a super-budget price, the Trio Élëgique perform all the works for Piano Trio by Beethoven on Brilliant Classics 94327 (5 discs at round the price of one full price CD). The recordings, made in 2012, are of excellent quality.