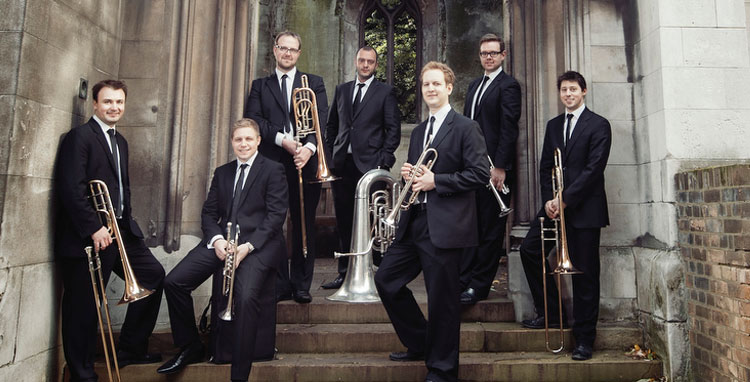 Appropriately for these post-Brexit times, Septura’s programme reminds us of the musical links between Britain and the continent over the last 500 years, comparing and contrasting the work of near contemporaries separated by la Manche.

We start with church music of the mid-16th century, moving on to theatre music composed by Purcell and Rameau (both reflecting the influence of Lully). The second half consists of music from the early years of the 20th century – Debussy rewriting the long tradition of the prelude, Parry and Ravel writing songs in response to the events of the Great War and culminating with Vaughan Williams setting an English folksong he had collected himself.

Septura brings together London’s leading brass players to re-define brass chamber music through the uniquely expressive sound of the brass septet. By creating a canon of transcriptions, arrangements and new commissions, Septura aims to re-cast the brass ensemble as a serious artistic medium. As well as appearing in recital, Septura have now recorded five CDs of their arrangements for Naxos to considerable acclaim.

Represents the very pinnacle of the art of brass ensemble performance. 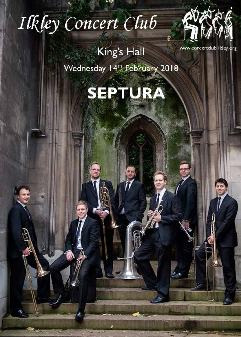 The summit of brass playing at the Ilkley Concert Club

After the disappointment of a rare cancellation in January, Ilkley Concert Club members were looking forward to last Wednesday’s concert. There may have been a few initial misgivings about a programme solely of brass music but these were soon swept away by the luscious sound and the smooth professionalism of Septura. These seven, principal players in major orchestras, have been playing together for six years and their familiarity with each other showed in the exceptional attack and precision of the playing and the apparently effortless blend of sound even in the softest passages.

Septura have made their reputation with programmes which recreate a brass repertoire based on arrangements of a wide range of musical styles and genres. This concert started with two Ave Marias by Josquin and Parsons – in which the evenness of the homophonic passages perhaps worked better than the contrasting contrapuntal lines. The livelier music which followed, suites of dances by Rameau and Purcell, delighted the audience: the second part of the Rameau ouverture resulted in spontaneous applause for the crisp articulation of the fast-moving parts. But there was much to enjoy even in the slow minuets which had some beautiful echo effects.

The ingenuity of the arranger’s art came to the fore in the six Debussy préludes which opened the second half. To recreate, and even sometimes excel, the myriad colours and shimmering effects of Debussy’s pianism for brass instruments is a major feat. The performances moved effortlessly from the ‘impressionism’ of Footsteps in the Snow and The Sunken Cathedral to the madcap jollity of Minstrels and General Lavine. Settings of contrasting songs by Parry and Ravel followed, the latter perhaps the more successful, leading into a folk-song setting by Vaughan Williams – the Turtle Dove – which, with its euphonium solo, paid homage to the northern brass band tradition. All this would have been enough to justify the generous applause which followed had not the group produced for their encore a whirlwind account of the Allegro multo of Shostakovich’s 8th string quartet – a truly stunning finish!

There are very few commercial recordings available of Brass Septets, and Septura face virtually no competition with tonight’s works. In the circumstances I am listing the 6 CDs that the group has made for Naxos, indicating where any of tonight’s works are featured. The recording quality of all the mid-price discs is superb.

All the recordings are available for download or streaming.