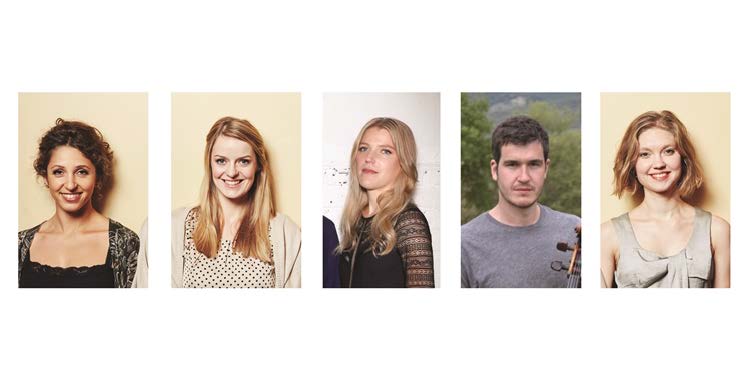 Since forming at the Royal Northern College of Music in 2007, the Benyounes String Quartet have forged a reputation for fresh, vivid performances and interpretations of refinement and integrity. They have won prizes in both the Orlando International String Quartet Competition and the Sándor Végh Competition in Budapest. The Benyounes have performed at the Verbier, Aix-en-Provence, Aldeburgh and West Cork Chamber Music Festivals.

For this concert they will be joined by Hélène Clément, the prize-winning French violist of the Doric Quartet, to play first Mozart’s brooding, dark 4th String Quintet which escapes onto the sunny uplands only in the last movement. The Adagio from one of Bruckner’s few chamber works follows – full of his characteristic long melodies and rich chromatic harmonies. Finally the mood lifts for Dvořák’s last Quintet, composed in remote Spillville, Iowa, and, like all his American works, infused with his impressions of the indigenous music of America.

“The polish of the Benyounes Quartet was new... they already seem seasoned veterans with their tight ensemble and confident projection.” THE TIMES 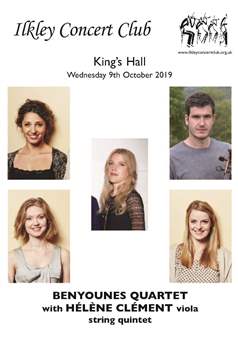 Dark energy from an excellent quintet

The new season of Ilkley Concert Club opened last Wednesday with a concert of string quintets. The Benyounes Quartet, who have forged a growing reputation over the last ten years, combined with Hélène Clément, violist of the Doric Quartet, to produce a wonderfully rich and dark string sound, full of energy and with crisp articulation. The additional tenor tones brought by the extra viola lend themselves to the melancholy and yearning that are characteristic of slow movements. This is particularly so of Bruckner, whose only chamber work, the string quintet in F, supplied the central work in the programme. The players interwove their long phrases beautifully, the themes emerging from the slowly shifting harmonies without disturbing the forward momentum of what is a truly symphonic work.

Mozart, himself a violist, produced six string quintets and for the first work, the players gave us the fourth, in the ‘dark’ key of G minor. The lively first movement, a masterpiece of counterpoint, is followed by an eccentrically stressed minuet, and then by a muted adagio. The final movement starts with a second adagio which modulates back to the major and leads to a sunny and energetic rondo finale.  All these aspects were well brought out in this performance: with excellent balance between the parts and especially sensitive playing by Zara Benyounes in the first and last movements where her solo line was prominent but never dominating.

After the interval, Dvořák’s ‘American’ Quintet, a much more joyful and exuberant work, was given an equally splendid performance. At times in the scherzo, we really felt that we were at a ‘hoedown’, while the inherent melancholy of the folk-like themes in the first and third movements was given its proper character.  The rhythmic energy of the final rondo brought the performance to a rousing conclusion, rewarded by prolonged and appreciative applause. An excellent and satisfying start to the new season!

There are many fine recordings of the Mozart String Quintets, so I shall restrict myself to two of my favourites, both at medium price.

The Chilingirian Quartet with Yuko Inoue (viola) are sympathetically recorded on CRD 3522. The coupling is the String Quintet K.406. The Naxos alternative, 8.553104, has the Hungarian Eder Quartet with Janos Fejérvári (viola), with the same coupling as the CRD disc, and is often available very cheaply via the internet.

Rather than suggest various discs including the Bruckner Adagio, I suggest trying the whole Quintet, coupled with his String Quartet, well performed by the Fine Arts Quartet and associates on Naxos 8.570788 at medium price.

Outstanding performances of the String Quintet and the Piano Quintet are on a fairly recent Supraphon CD (SU 4195-2) at full price. The excellent Pavel Haas Quartet is joined by Pavel Nikl (viola) and Boris Giltburg (piano). As a budget alternative, there is a very good Apex CD (0927 443552). The Keller Quartet with Anna Deeva (viola) perform the Quintet and the Keller Quartet performs Dvorák’s “American Quartet”, Op.96.