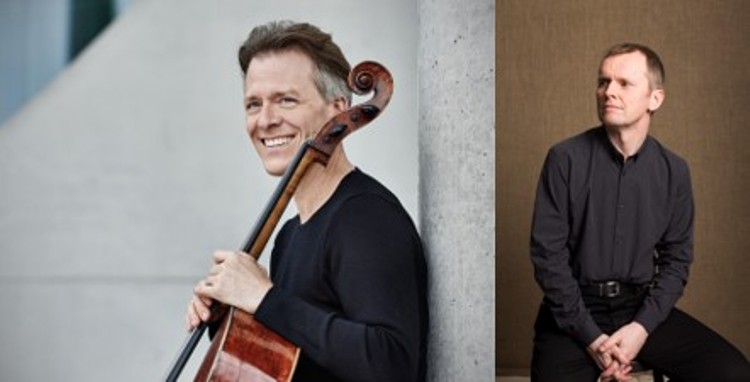 Alban Gerhardt has made a tremendous impact on audiences worldwide with his intense musicality, compelling presence and insatiable artistic curiosity. Scottish pianist Steven Osborne returns to Ilkley for a second visit. His insightful and idiomatic interpretations of diverse repertoire reveal immense musical depth. Together these artists make a perfect partnership.

We start with high points of the German romantic repertoire, the mellow, appealing five folk pieces from Schumann and the second sonata of Brahms, a mature master still composing with all the fire of youth. The second half brings a Spanish flavour to the Kings Hall with arrangements of atmospheric pieces which evoke the exotic excitement of a warm Iberian night.

“[they] are both superbly instinctive players, with an almost subliminal sense of what the other is about to do, so that every musical gesture they make seems totally spontaneous, as if they are exploring the music for the first time…” THE GUARDIAN 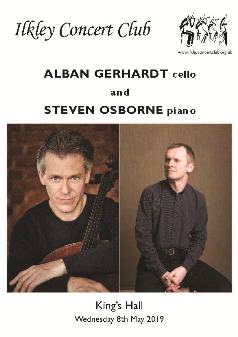 Supercharged mastery of the cello

To be present at the last concert of the Ilkley Concert Club’s 2018-19 season was to experience a great musical partnership. Alban Gerhardt (cello) and Steven Osborne (piano) regularly play together and it was easy to sense their rapport in the side-long glances and the quiet smiles that passed between them. They made a great team – introducing the music together with a depth of knowledge, a lightness of touch and just the right level of humour – all in the cause of serious music-making.

They started with Schumann’s ‘Five pieces in popular style’ – a failure in its attempt to provide music for gifted amateurs – for this is virtuosic writing!  But both players were fully up to the challenge, the cello fiery in the rapid passage work but tender and lyrical in the delightful melodies, the piano remaining in the background but coming to the fore when it was needed. This level of musicianship continued into Brahms’ F major cello sonata, a ‘meaty’ work with demanding parts for both piano and cello. It was carried off with great panache and enormous energy.

After the interval we were firmly in Spain with a cello arrangement of de Falla’s ‘Six popular songs’. Alban Gerhardt convinced both as the soprano soloist, high in the cello’s register, but also in the Spanish atmosphere he produced. Steven Osborne’s accompanying was impeccable throughout but he now gave a magical solo performance of Debussy’s Estampes – both in the percussive gamelan effects which give an Eastern flavour to ‘Pagodas’ and in the quieter impressionistic playing – one was completely unconscious of the individual notes, only hearing the quality of the sound!

Alban Gerhardt rounded off the concert with three virtuoso arrangements of Ravel. His playing had been on fire all evening but now he held the hall spellbound with his supercharged mastery of the cello – dazzling fingerwork, bowing with style and expressiveness and a superb variety of sounds – a tour de force which unleashed tremendous applause from a grateful audience. A truly memorable occasion!

Although this Decca recording was made in 1961, it sounds excellent, and the performance by Rostropovich and Britten is superb. Schubert’s Arpeggione Sonata and Debussy’s Cello Sonata complete the CD (475 8239 medium price). Should you prefer the sound of period instruments, Robin Michael (cello) and David Tong (piano) give fine performances, and include the two Brahms Cello Sonatas on Resonus Classics RES 10188 (full price).

Steven Isserlis and Stephen Hough give superb performances of the Cello Sonatas, and short pieces by Dvorák and Suk, on Hyperion CDA67529 (full price).

Harmonia Mundi’s set of CDs to mark the centenary of the death of Debussy have all proved excellent, and the recording of the Book 1 Préludes and Estanpes performed by Javier Perianes is no exception. The CD HMM 902301 is at full price.

An excellent Naxos CD 8.573820 (medium price) features transcriptions by Castelnuovo-Tedesco, including Alborada. The artists are Brinton Averil Smith and Evelyn Chen. Another Naxos disc, 8.557943, has Maria Kliegel and Raimund Havenith playing Virtuoso Cello Encores, including the Habanera. I have been unable to find a recording of Tzigane for Cello and Piano.