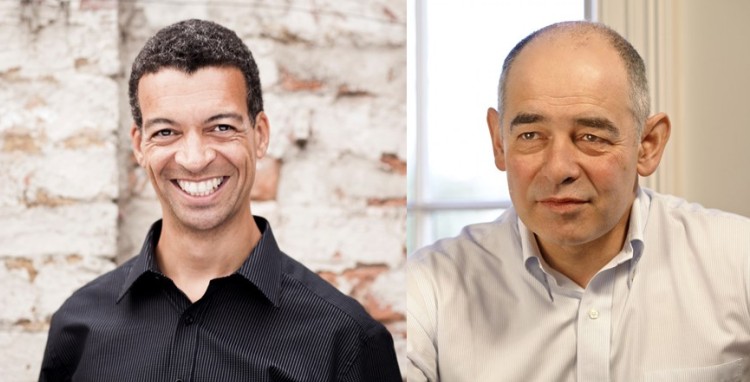 A voyage around Hardy

Finzi – Songs to texts from Thomas Hardy from Earth, Air and Rain, op 15 and Before and After Summer, op 16

Roderick Williams needs no introduction to Ilkley. This immensely charismatic baritone brings alive the worlds of lieder and of English song. Returning for a third visit, he will be accompanied by Iain Burnside, who has appeared with many of the world’s greatest singers and is also a leading writer and broadcaster.

They will perform songs by Finzi based on poems by Hardy, the writer who spoke most deeply to him and whose poetry brought out the best in his gift for responding to words. These will be interleaved with a selection of lieder by Schubert, another composer who could set words in a way in which the musical shape is derived entirely from the text. It promises to be an intriguing and enjoyable evening of song.

“Williams is an unfailingly intelligent singer and is matched every step of the way by Burnside. Intepretatively they barely put a foot wrong…” THE GRAMOPHONE 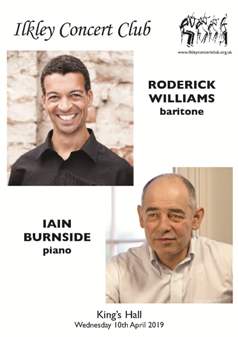 A Masterclass in Song at the Ilkley Concert Club

For Wednesday’s recital at Ilkley Concert Club Roderick Williams had chosen to premiere an adventurous programme, mixing Gerald Finzi’s powerful settings of Thomas Hardy’s verse with carefully selected Schubert Lieder. What could have been merely an intellectual conceit was triumphantly justified in performance. Roderick Williams has a gift for presenting songs so that their meaning is fully realised. Not only are the words pronounced clearly but the carefully-chosen timbres of his voice and his apparently spontaneous gestures come together to create a true interpretation which speaks immediately to the listener. Iain Burnside at the piano is a real partner in this, bringing out the telling details in the piano part which enhance the overall effect.

This was immediately seen in the first Schubert song – Im Haine – where the accompaniment flowed along easily and William’s light and relaxed articulation of the highly-decorated line combined to illustrate the poet’s lightness of heart. It continued into the Goethe setting where the singer became the fish and then the horse of the lover’s fancy and into the pathos of Die Liebe hat gelogen – ‘love has lied’. But the high point of the first half came with a remarkable performance of Finzi’s masterpiece – Channel Firing – in which we felt the roar of the guns, saw the mouse drop its food with surprise and heard the voice of Hardy’s cynical God berate mankind for its addiction to war – a truly contemporary message.

The second half brought a complete performance of Finzi’s cycle Earth and Air and Rain of which the highlights were the delightful military fantasy of ‘Rollicum rorum’ and the simplicity of ‘To Lizbie Brown’ – an object lesson in how to set a strophic song. The eerie atmospheres of both ‘The Phantom’ and ‘The clock of the years’ were wonderfully evoked and the true horror of forcing time to reverse made clear in Roderick Williams’ demeanour.

This was an unforgettable evening of music for Concert Club members and a veritable masterclass in Song.

Tonight’s artists are perhaps the best advocates of these songs on record, with 2 medium price CDs from Naxos-8.557644 and 8.557963, and the recording quality is excellent. A good alternative comes from Hyperion CDD22070 as a budget 2CD set. The song cycles are shared between Stephen Varcoe (baritone) and Martyn Hill (tenor), with Clifford Benson (piano). As usual with Hyperion the presentation and recording quality are excellent.

With this composer’s songs it is usually a matter of choosing your favourite lieder singer and accompanist. I am suggesting 3 recordings which give a good selection of more popular songs. On Harmonia Mundi HMC 902141 (full price), the baritone Matthias Goerne is accompanied by Andreas Haefliger. Christian Gerhaher, one of my favourite lieder singers of the modern generation, has Gerhard Huber at the piano. The Sony full price CD has the rather awkward number 88883712172. From an older generation, and my overall favourite, Dietrich Fischer-Dieskau, with Gerald Moore as accompanist, is on DGG E474 1732 at medium price.