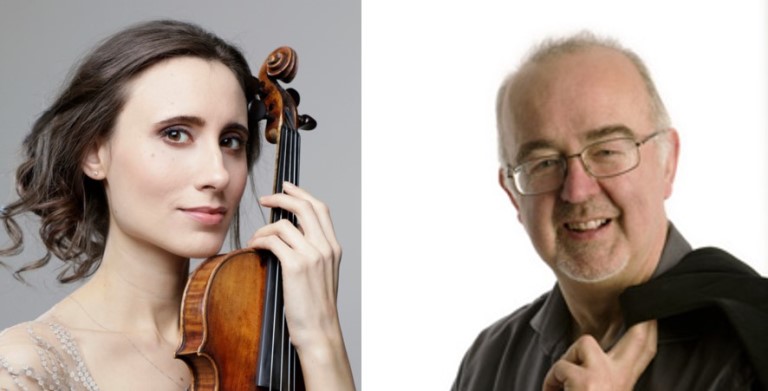 We are happy to announce that in place of Tasmin Little, who has had to withdraw because of a hand injury, our next concert will be given by the highly-talented Jennifer Pike. Renowned for her dazzling interpretative flair and exemplary technique, violinist Jennifer Pike has taken the musical world by storm with her unique artistry and compelling insight into music from the Baroque to the present day. She first gained international recognition in 2002, when, aged 12, she became the youngest-ever winner of the BBC Young Musician of the Year and the youngest major prizewinner in the Menuhin International Violin Competition . Jennifer is joined by one of Britain’s best loved pianists, Martin Roscoe. His enduring popularity and the respect in which he is universally held are built on a deep and thoughtful musicianship allied to an easy rapport with audiences and fellow musicians alike.

Their programme combines Mozart’s violin sonata K301, a two-movement work from 1778 with Elgar’s violin sonata, written in the same creative outburst in 1918 which gave rise to the cello concerto. Clara Schumann’s Romances of 1853 were written for Joachim and played by him on a successful joint concert tour. Vaughan Williams the Lark Ascending was originally written for violin and piano in 1914 but is better known in its orchestral version. Miklós Rózsa wrote music for the concert hall in addition to his more famous film music, the variations were written at the Leipzig Conservatoire but show a mature understanding of how to blend folk melodies with classical forms.

“It is their performance that brings something completely new to the work. While following Debussy’s indications with the utmost attention to detail, Pike and Roscoe have a range of colours and nuances that make you do with your ears what you do with your eyes when you stare. Magical and captivating, and completely at home in the elusive world of Debussy, their recording makes me feel I am discovering the composer as for the first time.” 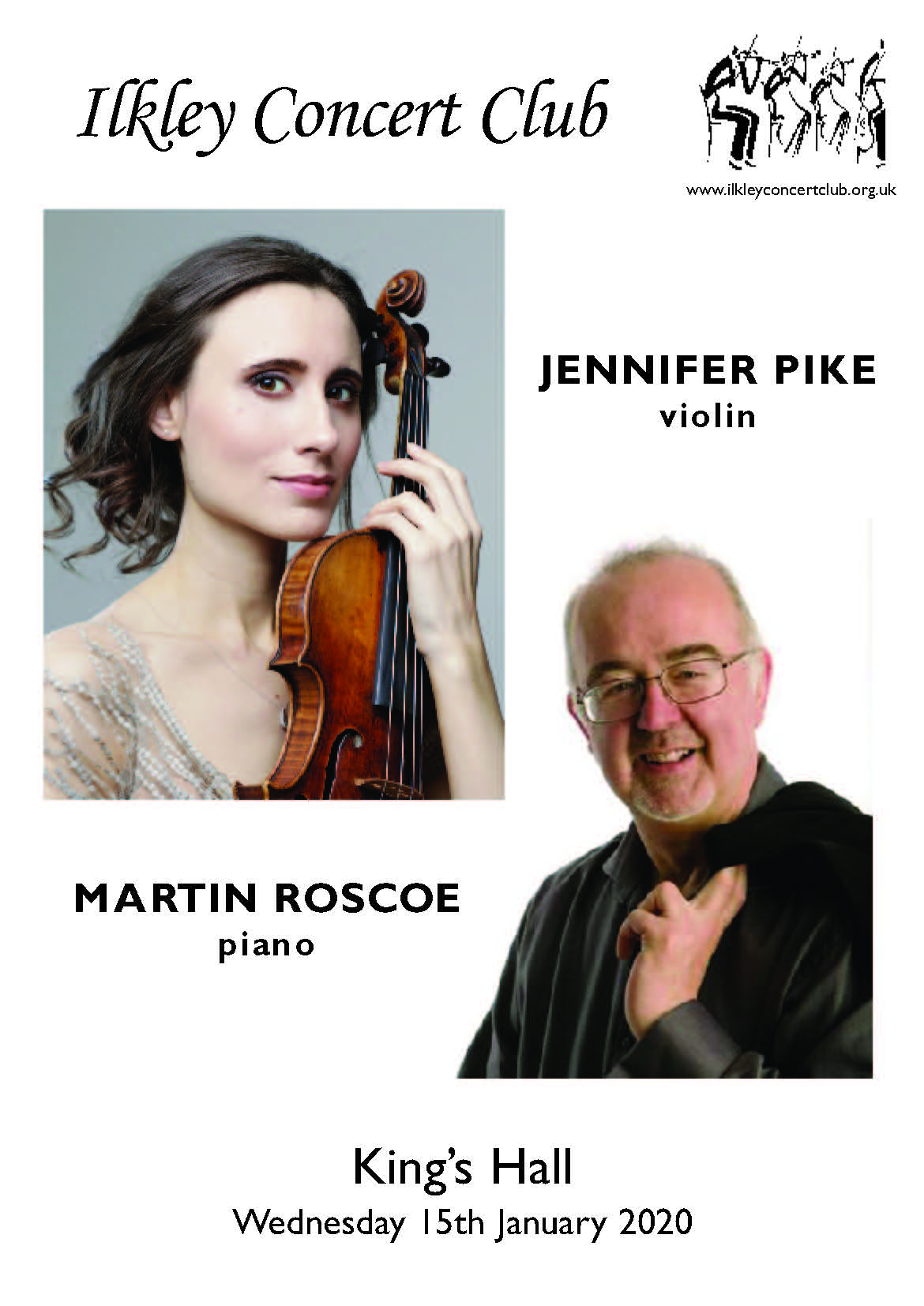 The audience in a more than usually packed Kings Hall were treated last Wednesday to a wonderfully satisfying concert of violin and piano music. Jennifer Pike, standing in at relatively short notice for an injured Tasmin Little and playing with one of her frequent duo partners, Martin Roscoe, gave a performance which perfectly combined virtuosity with total commitment to the music.

The highlight of the first half was a captivating account of Elgar’s little-heard Violin Sonata of 1918, the first fruit of his return to composition after a period of depression and which culminated in the Cello Concerto. This sonata however is very far from being depressing music. Violin and piano were ideally balanced, the violin playing was intense and authoritative in the bold, vigorous first movement, unbelievably light but precise in the ‘ghostly’ outer sections of the second and warm but yearning in the lyrical central section. The two players perfectly complemented each other, responding with sensitivity to each other’s moods both here and in the three Romances by Clara Schumann which followed after the interval.

It was a real treat then to hear the original 1914 violin and piano version of Vaughan Williams’s familiar The Lark Ascending played by Jennifer from memory!  She placed each note with complete assurance, whether it was part of the dizzying runs and harmonics of the skylark’s song or of the simple pentatonic melodies at the heart of the piece, while the audience listened with rapt attention.

The concert concluded with Miklós Rósza’s Variations on a Hungarian Peasant Song, a feast of delights for the audience and a considerable challenge for both players with some real ‘gypsy’ fireworks in the later variations. There was warm and generous applause for what had been an exceptional recital, rewarded by a pitch-perfect performance of the ideal encore – Elgar’s Salut d’Amour.

Alina Ibragimova and Cedric Tiberghien have made critically acclaimed recordings of all the Mozart Violin Sonatas. K301 can be found on Hyperion CDA68091 (2 CDs for the cost of one full price CD), and the couplings are K10, K14, K30, K304, K379, K481. A good alternative, with a rather more laid back approach, comes from Takako Nishizaki and Jenó Jandó on Naxos 8.553111 (medium price), coupled with K296 and K303.

Nigel Kennedy was always at his best in Elgar, and with Peter Pottinger as a sympathetic pianist, he is recorded on Chandos CHAN 8380 (full price), coupled with Elgar Miniatures.

A most interesting CD of works by female composers comes from Tasmin Little and John Lenehan on Chandos CHAN 20030 (full price). The other works are by Amy Beach and Dame Ethel Smyth.

This work is usually performed with an orchestra, but can work well with Piano and Violin. Julia Hwang and Charles Matthews produce a beautiful performance on Signum SIGCD486 (full price). Grieg’s Violin Sonata No.3 and works by Lutoslawski and Wieniawski complete the disc.

A CD of works for Violin & Piano by Rósza are performed by Philipp Quint and William Wolfram on Naxos 8.570190 (medium price). The couplings are North Hungarian Peasant Songs and Dances and the Solo Violin Sonata.