The coronavirus lock down was hard for everyone, music lovers and musicians amongst many others. Ilkley Concert Club did its bit to help by presenting online concerts, some specifically recorded for the Ilkley audience, in 2020 and earlier this year. Last week the Club was finally able to start its delayed 75th Season at the Kings Hall with a real live concert: Leon McCawley and the Castalian Quartet giving two performances to reduced socially distanced audiences and meeting with a great welcome.

Now Ilkley Concert Club has come up with another idea, this time to help young musicians on the verge of their professional careers who have been severely disadvantaged by interrupted teaching, the difficulty of instruction by zoom and the loss of opportunities to perform in public. With its well-established audience and the excellent venue of the Kings Hall the Concert Club has stepped in to invite groups of students from the Royal Northern College of Music to perform a series of afternoon chamber concerts. Teaching staff at the RNCM were quick to respond with a list of ensembles, all recent graduates, in urgent need of opportunities to widen their experience of public performance and set them on the route to a professional career.

The concerts will feature a solo pianist and four ensembles all specially picked by their tutors for their promise as performers. The young musicians of the Levare String Quartet, the Hillon piano trio, the Rumava String Trio, the Festivo Wind Quintet and pianist Mason Greenwood are already starting to develop professional careers based on the training they have received at the RNCM. They follow in the footsteps of illustrious alumni including the Elias, Heath, Brodsky and Benyounes Quartets which have all performed in Ilkley. The Concert Club is delighted to be offering a platform to these young players and also to give the chance for local music lovers to enjoy afternoon concerts of chamber music with socially distanced seating in the secure atmosphere of the Kings Hall.

The concerts will take place on Thursdays, October 28th, November 11th and November 18th 2.30 -3.30 pm. Tickets are available to members and to the general public costing £7 for a single concert or £18 for the series of three.

Click on a Programme Cover for the Programme Notes 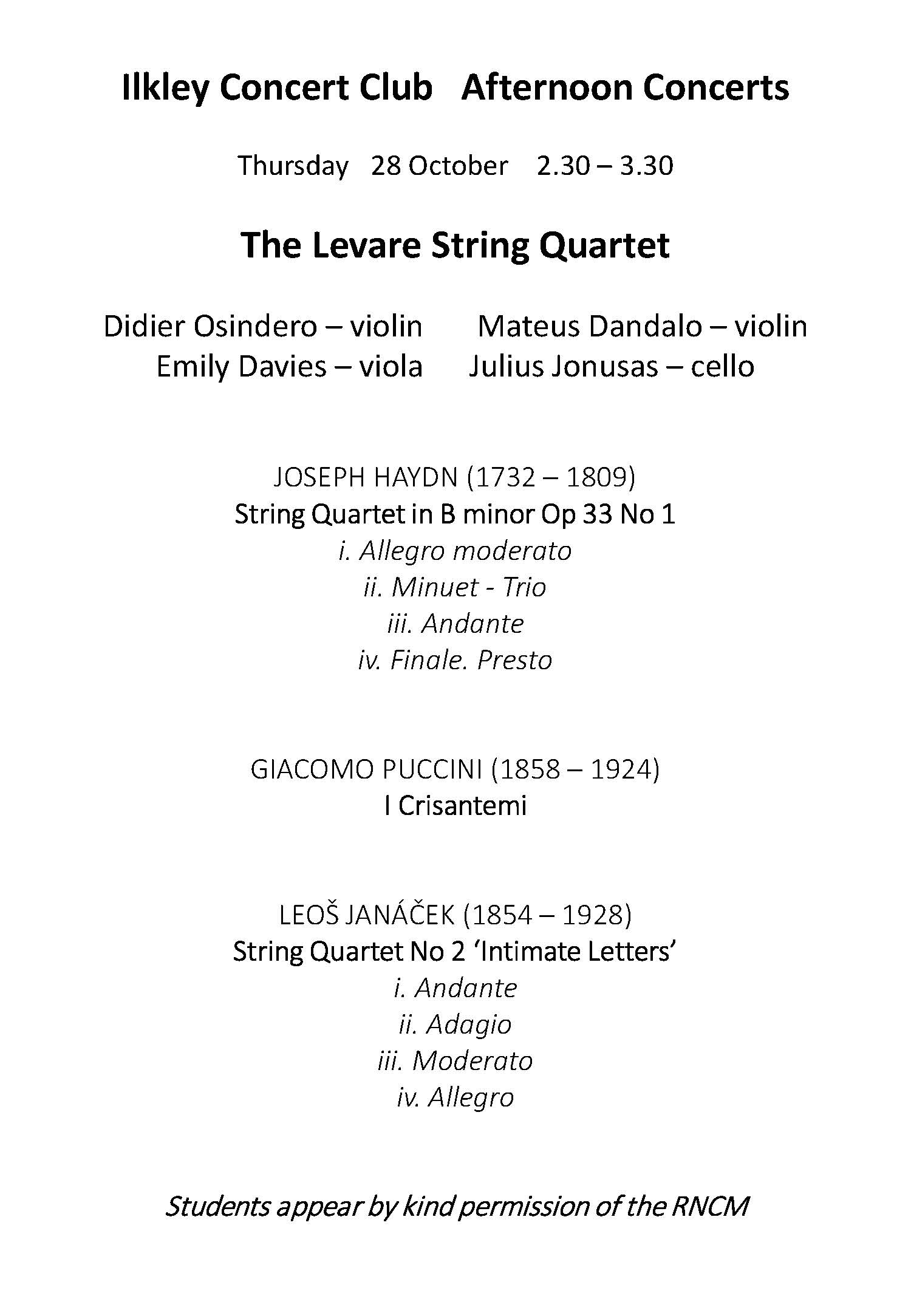 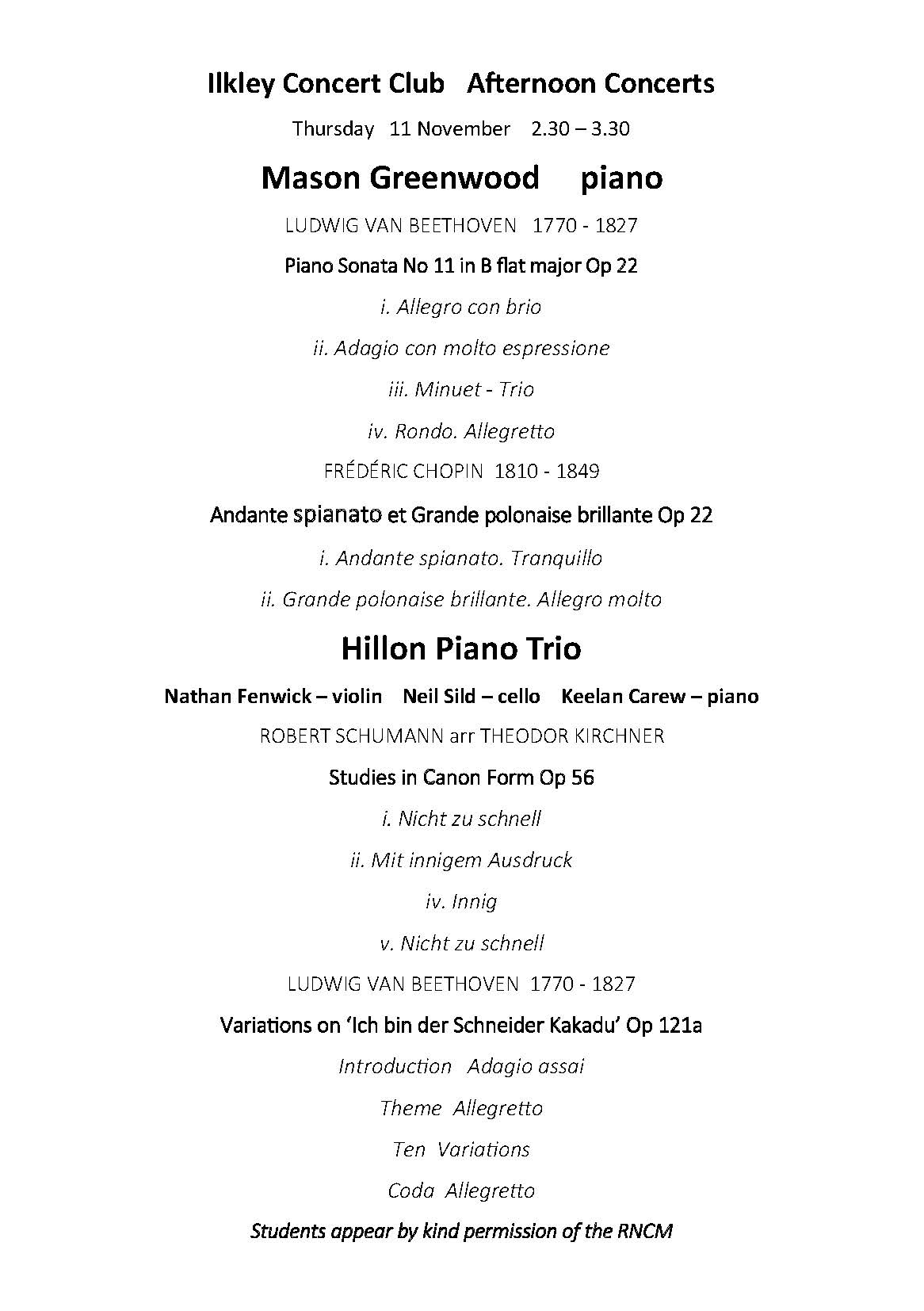 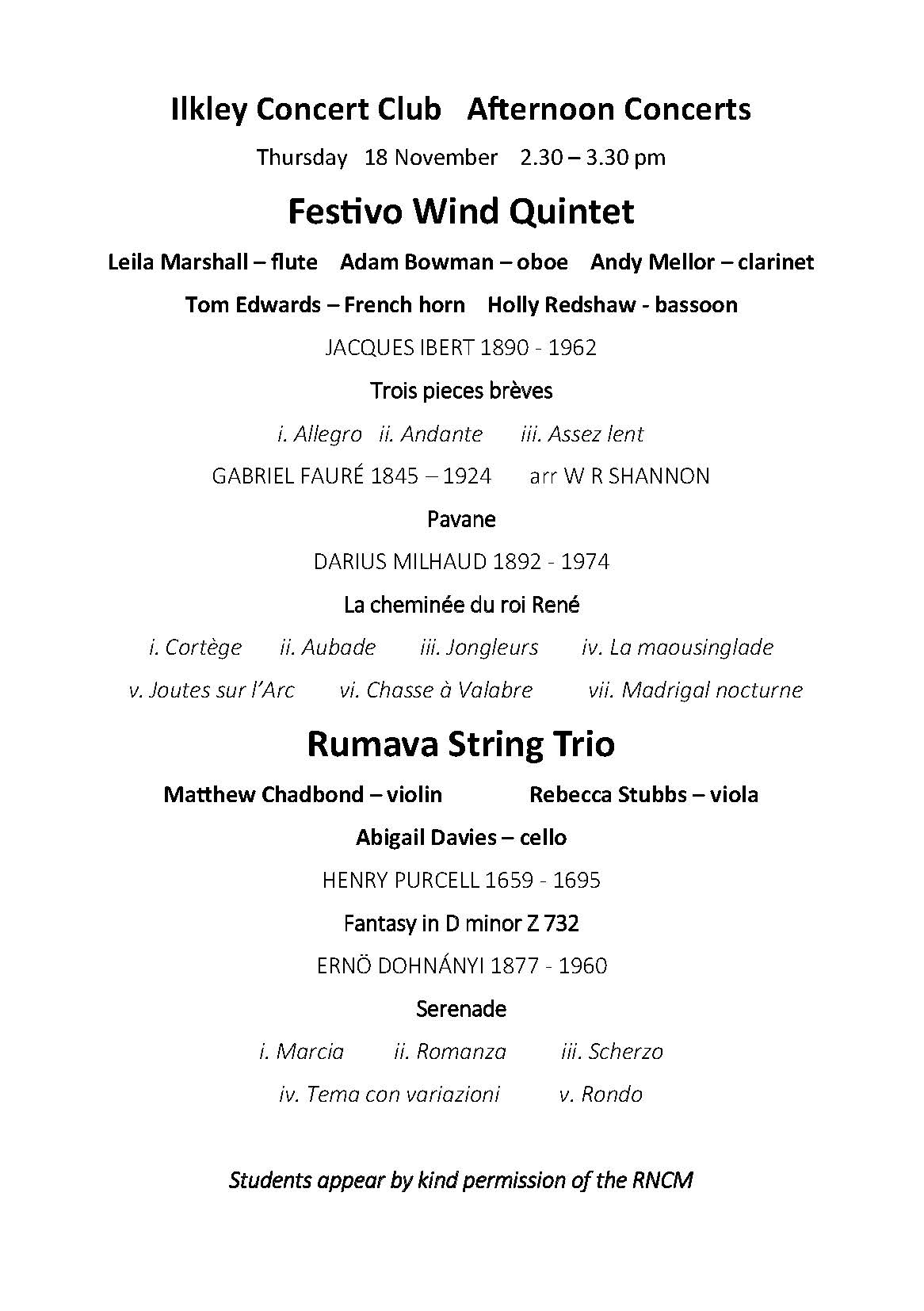 Published in the Ilkley Gazette on November 25, 2021

Students from the Royal Northern College of Music have given three wonderful afternoon concerts over the last month. These well-attended occasions have seen playing of the highest standard – definitely not what is conjured up by the words, ‘student performance’!

The first concert was given by the Levare Quartet who held the audience spellbound with some stylish Haydn, a deeply felt performance of Puccini’s ‘Chrysanthemums’ and an inspired rendering of Janacek’s challenging ‘Intimate Letters’ quartet. The appreciative audience were treated to a thrilling experience of first-class string ensemble playing by a group clearly on top of the technical challenges and, one could sense, growing into their own style. Special mention should go to the first violin, Didier Osindero, for his wonderfully warm rich tone as well as a delightful lightness of touch in virtuoso passages, and to the violist, Emily Davies, who excelled with wonderful vibrato and shimmering pianissimos in the Janacek.

The second concert featured Bradford-born pianist, Mason Greenwood, who gave a deeply thoughtful performance of Beethoven’s rarely heard op. 22 sonata, followed by a dazzling display of pianism in Chopin’s challenging Andante spianato et grande polonaise brillante. The Hillon Piano Trio followed with four of Schumann’s canonic studies for the pedal piano, arranged for piano trio, and Beethoven’s variations on the patter song – ‘I’m the tailor, Kakadu’ – a wonderful example of how to make a stunning work out of a piece of nonsense! The two pianists, our soloist and Keelan Carew from the trio, presented an intriguing comparison. Both technically able, Mason’s more introverted style unfortunately made less impact than Keelan’s extravert joy in performance.

The Festivo Wind Quintet kicked off our last afternoon concert with Ibert’s exuberant Trois pièces brèves followed by a wind arrangement of Fauré’s Pavane. The players all shone in their solos although there were a few early issues with balance. However La chemineé du roi Réné – a suite from a film score by Milhaud – brought out their best with its characterful evocations of jousting and hunting and serene final nocturne. The Rumava String Trio provided a contrast with an accomplished vibrato-free performance of a Purcell fantasy followed by Dohnányi’s late-romantic Serenade, full of lively counterpoint and suffused with Hungarian melancholy – the violist, Rebecca Stubbs, bringing particular pathos to the Romanza.

The innovation of afternoon concerts has been much welcomed by concert goers. It is to be hoped that we shall hear more of these excellent musicians in the future.